For Freedom: While Mexican Children Cry, Here’s How My Grandpa Got to America 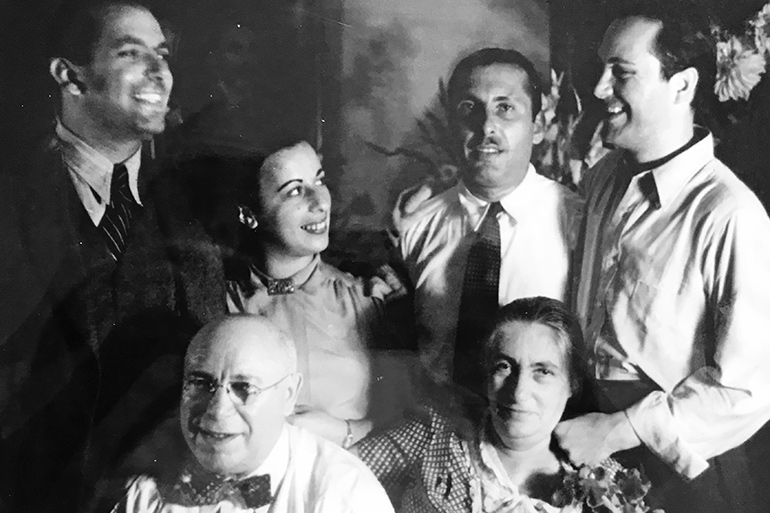 My grandfather is in the bowtie in the front row. as a teenager, he left Romania and two years later escorted his two younger brothers, ages 13 and 9, to America, Photo: Dan Rattiner family photo

As children cry for their mothers on the American side of the border with Mexico, thanks to perhaps the worst president America has ever had, I decided to write about how my own family came here to America. I had been told that my grandfather, Franz, when he was a teenager, left his parents in the old country at their insistence, understanding he would likely never see them again.

Above is a picture of him, taken in Brooklyn when he was 59. He sits in the front row with his wife. Behind him are his three sons. My father, with his big smile, is on the left, my mother, who he had just married, is beside him.

Franz Rattiner was born in Romania in 1878. When he was five, that country’s government embarked on a pogrom to rid that country of Jews. The claim was that Jews were taking jobs that should be available to Christians. Children of Jews were no longer permitted to attend public schools. Citizenships were taken away. Jews could no longer work in professions, or be allowed to hold any job other than the most menial. Muslims also were victims of these laws. “Troublemakers” were shot.

That same year when he was five years old, the Statue of Liberty, built by the French as a gift to America to celebrate the 100th anniversary of the American Revolution and their part in it, arrived in New York Harbor. Liberté, Équalité, Fraternité.

I know nothing of my grandfather’s parents in Romania. But I do know they lived in Bucharest and had nine children, of whom Franz was the oldest. The plan was that when he was old enough, they would scrape up enough money to get him out of the country. At age 19, they sent him to Paris. In Paris, he could get along on his own somehow. The goal was for the next two children in the family to come to him when he could afford it, and then, with those children in tow, come to America.

In Paris, Franz made money by playing the violin in cafés and restaurants. When he was 22, he sent for his two younger brothers, aged 13 and 9, and shortly after that, brought them on the steamship Normandie from Le Havre to New York.

The year was 1900. The ship arrived Christmas day. Franz spoke Romanian and French. Arriving at Ellis Island with his young family, he listed his trade as “bookbinder.” He’d learned that trade as a boy, and in Brooklyn he worked doing that. He learned English. In the evenings, he taught music. Other immigrants helped these children. Soon, his younger brothers and sisters found work and went off to lead their own lives.

There were no immigration laws back then, although if you were sick and contagious you were turned away. America’s first restrictive immigration law was passed in 1901, the year after they arrived. President McKinley had been shot that year by an “anarchist.” Henceforth no anarchists could be admitted to America. Stricter laws and quotas began to come in around 1910. In the late 1920s, quotas were established by country of origin, to be loosened or made stricter as the occasion warranted.

Franz married a Romanian girl named Margaret in Brooklyn when he was 24 and she 22. In
her youth, according to my dad, she was a great beauty. I do not know her background or maiden name.

My dad became a chemist and pharmacist and moved our family to Montauk in 1956, when he bought White’s Drug Store. I was a teenager then, but by that time had come to know my grandparents pretty well in Brooklyn. They lived upstairs in a two-family house at 1796 St. John’s Place. (I have one of grandpa’s business cards. It reads “Prof. F. Rattiner, School of Music” and gives that address.) The upstairs was what was called a railroad flat, with the living room in the front, the kitchen in the middle and the bathroom and two bedrooms in the back. The living room had a grand piano, a banjo, clarinet and guitar set up for my grandpa’s music lessons.

The kitchen smelled like cooked cabbage. They had a Dalmatian who barked whenever anyone came up the stairs. I remember my grandpa as a gentle, kindly man with a soft voice and a sweet smile. I remember my grandma as a by-the-rules tyrant of the house. My mother, I recall, told me she thought her mother-in-law had this strict and unpleasant attitude because she had lost her beauty as she got older. Grandma had been unkind to her daughter-in-law, apparently.

Once, when I asked my mom why she married my dad, besides the fact that she loved him, she hesitated and then said, “It was because he was a hunk.”

Franz and Margaret died at home from natural causes in their early 70s. From the dates on their tombstones, it became apparent to me, seeing their marriage certificate, that she had lied about her age when she got married. She was not 22. She was 25, a year older than he was.

Obviously, they had come here fleeing oppression. The same as most people fleeing Mexico today.

Here’s what Magdalena Escobedo, a worker at a migrant shelter in Tucson, told a New York Times reporter Saturday when asked why these people took this dangerous journey.

“When you’ve got a gun to your head, people threatening to rape your daughter, extort your business, force your son to work for the cartels, what would you do?”

And of course, this is on the base of the Statue of Liberty: “Give me your tired, your poor, your huddled masses yearning to breathe free, the wretched refuse of your teeming shore. Send these, the homeless, tempest-tossed to me, I lift my lamp beside the golden door!”

Lately I find myself yearning for the old days, when we lived by the golden rule, the 10 commandments and the freedoms afforded by the liberty and democracy of the best country in the world, the United States of America. There were things wrong, to be sure. And there were bad guys. But during that time, the laws of the land were upheld with love and compassion, and good works were encouraged by a president who had a moral compass, ethics and pride in our nation’s values.

This current guy in that office is not such a person.