2021 Proves an Amazing Year for Art in Southampton Village This has been a banner year for the art scene in the Village of Southampton.

One year ago this month, Mayor Jesse Warren and the Board of Trustees enacted Local Law No. 6, which required vacant village storefronts to feature art in the windows to keep the streets looking lively and colorful year-round. While not every storefront owner cooperated, the law was at least a partial success largely due to the Southampton Art Center’s Storefront Art Project, which spearheaded window installations of works by Alice Hope, Miles Partington, Kerry Sharkey Miller and Monica Banks in the winter and spring months.

“It’s something to attract visitors to our downtown to support businesses, so they can come along, look at some of these art installations and visit some of the art galleries. We think it will be a draw and help businesses, versus (vacant storefronts) being a negative and detracting from businesses,” Warren said of the new law last December. “I like that we’re seeing that Southampton is becoming a bit of an art hub with all the new art galleries and institutions.”

Since July 2020, the art scene of Southampton has developed beyond just vacant storefront art, however, with a massive swell of new galleries—both the annual small pop-ups and larger, more long-term institutions. Perhaps the new addition that shook the local art scene the hardest was Phillips Southampton, the youngest branch of a global art auction platform, which opened last August in the giant building that once housed Southampton town hall and then Pottery Barn.

“Our new location in Southampton will allow for intimate in-person viewings of exceptional works of art, jewels and watches, as well as the flexibility for our top collectors to experience artwork in person,” Phillips CEO Edward Dolman said when the location opened.

That same week, Denis Leon Gallery opened in the village, followed by A Is for Art, Lex Weill Gallery, Black & White Gallery / Project Space, Hauser & Wirth and others in the coming months. One has to wonder what draws so many artists and curators to Southampton. For Ric Michel, who opened his first Ric Michel Fine Art Hamptons location in 2019, it was the village’s ideal location.

“In venturing east three years ago, Southampton seemed a natural complement to our TriBeCa space and the most central location for our clients throughout the East End,” Michel says. “At the time, we were one of only two galleries on Jobs Lane. Now—with eight galleries, the Southampton Arts Center and Christie’s on Jobs Lane alone—Southampton has become a thriving art district.”

Location was key for another expanding art business, this one rivaling Phillips Southampton in terms of its impressive Southampton gallery space. A new Christie’s Southampton outpost has been set up in the beloved, but long-vacant, 5,600-square-foot glass car showroom and repair shop at 1 Pond Lane through 2022.

As part of a collaboration with Carpenters Workshop Gallery, the pop-up’s first exhibition, Out East, will showcase functional design pieces by Nacho Carbonell, DRIFT, Vincent Dubourg and Aldo Bakker alongside works from Christie’s by artists inspired by the East End, including Willem de Kooning, Helen Frankenthaler, Lee Krasner and Roy Lichtenstein.

“Both the mayor and the community at large is supportive of this cultural development, and I think it’s really elevating the culture not just through the season, but also in the off-season,” says Ashlee Harrison, director of the Americas for Carpenters Workshop Gallery. “You have Phillips that has opened, anchoring one end of town … and you have Christie’s featuring Carpenters Workshop anchoring the other side of Southampton. I think having both of those beautifully iconic buildings that have been repositioned as gallery spaces really sets the tone, and then you have Hauser & Wirth and all these other galleries and pop-ups, the Peter Marino Foundation, (Southampton Cultural Center and Southampton Arts Center). It’s such a small town that has really developed as an art community. For me personally, it’s an easily accessible location. It’s not so far from the city—it’s one of the first Hamptons—and if you’re coming from east, from Montauk, you have to drive through Southampton. I think it’s very strategic.”

The spacious interior of Christie’s Southampton was a key point in making the Carpenters Workshop collaboration work, as the latter’s large-scale functional designs need plenty of room to breathe. Plus, Carpenters Workshop has a longstanding tradition of selecting gallery spaces in buildings with unique architectural history.

“A big, bronze Wendell Castle (sculpture) isn’t something you’d necessarily put in your New York apartment, but it can live very beautifully in a garden or terrace in the Hamptons,” Harrison adds.

Perhaps the most recent addition to the Southampton art scene is the Loves Gallery pop-up, which just held a VIP opening on Saturday, July 3. After fleeing her ground-zero home after 9/11, Jennifer Contini found refuge in her Hamptons summer home where she began “painting heart after heart after heart to pump love back into New York City.”

It was in Southampton that the Ohio native found her community. She continued to paint thousands of her hopeful hearts, which she shipped out to buyers near and far, and abstract works, which Rudy Gambino of La Parmigiana eagerly offered to hang in his restaurant.

Recently splitting her time between Ohio and New York, Contini reached out to Gambino about adding her latest abstract painting, “Chasing the Sun,” to her dedicated wall in La Parmigiana. She posted about her recent journey back to New York, painting in hand, on Instagram, which caught the attention of Marianne Barnett, the UPS Southampton owner and a friend of Contini’s, who had serendipitous news to share: UPS Southampton had just moved from 50 Hill Street to 26 Hill Street, leaving the old storefront vacant. All that remained in the windows was a selection of Barnett’s breathtaking animal photography, per the 2020 vacant storefront art law.

“This is the place where I would ship; I would see Marianne almost every day,” says Contini—whose works have been featured in exhibitions across the world and who just sold one of her pieces for $15,000. “So (I chose) Southampton not just because of it being a place of serenity and peace, but the community itself, like Rudy at La Parmigiana hanging my artwork— that’s what our gallery is about, too. It’s 50 yards away from Christie’s, which is just an amazing story in itself, and here we are, (the emerging artists I represent and I) who are selling our paintings. … I’ll get them into this amazing art scene that’s going on right now.”

“We are going to be a gallery for everyone,” Contini adds. “We’re planning on doing workshops for adults and children. Children are the focus of ‘Paint Your Heart Out.’ We’re going to draw in, not just the gallery side, but an actual hands-on side for the community to come in and express themselves as artists.”

As summer 2021 continues, East Enders will likely see a few more new galleries pop up in Southampton Village, followed by a wave of storefront art installations likely to return later this year as many galleries and stores began their winter hibernation. The seasonal timeline may be similar to other Hamptons villages, but at least in Southampton, the art scene offers something new to see year-round. 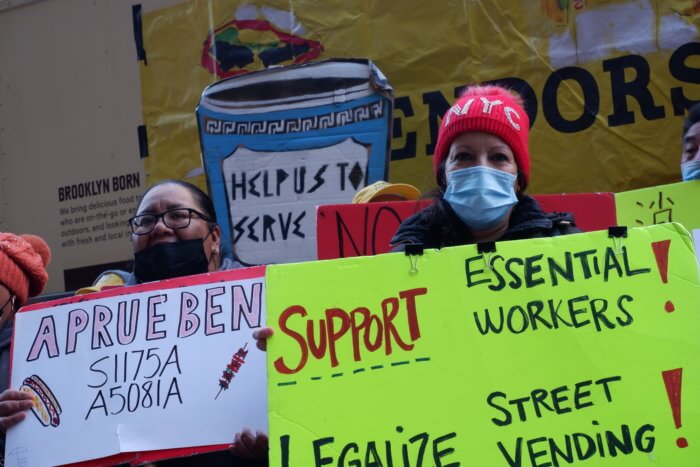 ‘We want him to get serious’: NYC street vendors demand action, not talk, from mayor at City Hall rally for protection