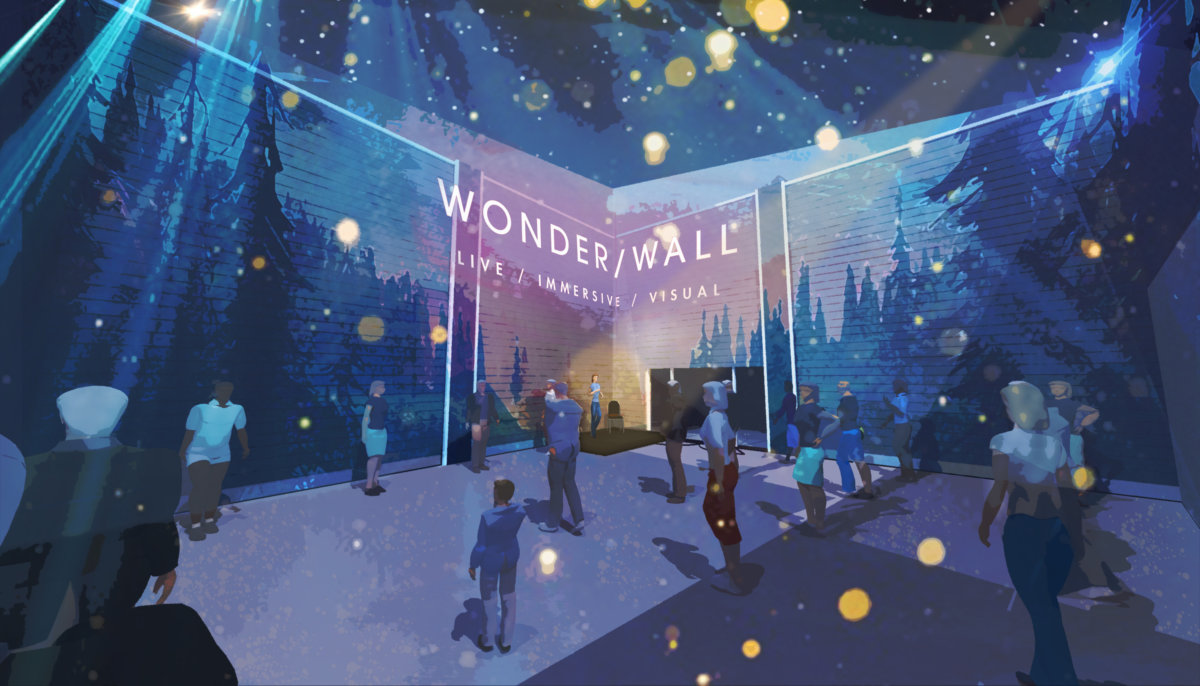 One key aspect of theatrical storytelling that Bay Street Theater excels at is immersion—transporting its audience to the famous David Frost interview with Richard Nixon or to the harrowing Hollywood Blacklist trials of the 1940s and ’50s—and it accomplishes this not through the enviable acting chops of its stars alone, but also through the projection designers’ ingenious visual displays that elevate the level of immersion to another level. Now for his curatorial debut at the theater, Bay Street Artistic Associate Josh Wilder is pushing these behind-the-scenes supporting players into the spotlight with a new, outdoor video performance series titled Wonder/Wall.

Throughout July, Bay Street’s courtyard will be transformed into an immersive storytelling space that marries live performance and video projection to create an experience unlike anything offered in Sag Harbor before it. With a new story to experience each week, the theater will produce four world premieres created by five diverse cutting-edge video artists.

“Actors are coming back to the stage, but not en masse just yet. And I think that this is the perfect opportunity for us to see that projection designers are also storytellers of the theater,” says Wilder, whose background is as a Philadelphia playwright and producer. “What’s really amazing about it, is that we get to see them as the lead character—they’re the leading artist of this thing.”

The idea for Wonder/Wall came to Wilder during the pandemic from two different sources: From a realization that when Broadway and other theaters closed, society fully shifted its focus from the stage to the screen; and from the Movement Theatre Company, an NYC-based company run by young people of color, that was highlighting designers at that time.

Beginning on Tuesday, July 6, Wonder/Wall will run Tuesdays through Sundays from 8:30–10:30 p.m. Each evening features five individual 15-minute performances, utilizing a live performance element that plays out within the immersive video world surrounding a standing audience of 20 individuals.

The Wonder/Wall roster of participating artists include Rasean Davonté Johnson, Yee Eun Nam, Mike Billings, Brian Staton and Brittany Bland. Each week, a different artist reimagines the Bay Street courtyard to fit their unique vision and answer to Wilder’s question, “What does ‘wonder’ mean to you during this time?” creating four uniquely engaging and reflective video art experiences.

“I think the most amazing (aspect of Wonder/Wall) for me is the diversity, honestly. When I was in drama school for basically a lot of my life, I didn’t meet any projection designers of color until I got to undergrad, and even they were rare,” Wilder says, adding what a joyous experience it has been to see these artists bare their souls in this visual medium, especially after a year like 2020. “Now that we’ve all been through this traumatic experience as a society of human beings, I think that we have no choice but to keep continuing to do the work of making space for everybody, from all backgrounds, from all disciplines and from all cultures.”

From July 6–11, Rasean Davonté Johnson presents “We Are in This Together, as Well as the Stages: Shutdown, Crisis, Restart,” which is, quite simply, a production that needs to be experienced. He is the owner of the design studio eightinfinitystudio which has been responsible for projects such as A Night of Wonder in collaboration with sound designer and composer Pornchanok Kanchanabanca and A Wedding and an Ostrich at the Eiffel Tower in collaboration with Elizabeth Mak.

Running July 13–18, is Yee Eun Nam’s “Frankenstein,” which reimagines the classic tale around the question: What if Frankenstein is one of us? Born and raised in Seoul, South Korea where she studied sculpture and metal craft, she is now a visual artist and an award-winning set and video designer for opera and live theater.

From July 20–25, audiences will be treated to “20,000” by Mike Billings and Brian Staton, an irreverent fusion of imagery and text from Jules Verne’s 20,000 Leagues Under the Sea and the writings of environmentalist Rachel Carson. Billings is a New York City-based designer who recently designed The West End production of The Prince of Egypt. Staton is Bay Street’s Associate Production Manager and Lighting Supervisor and helped produce a moving production of The Great Gatsby at the theater.

Lastly, Brittany Bland’s “Smile” runs July 27–31, putting the audience at the center of a Harlem-born photographer’s family archive through the use of live projection and audio interviews. She is a masterful projection designer for the stage, whose work often explores the concepts of legacy, memory and empathy.

“This is a bold step in a different direction for Bay Street, and my hope is that it’ll continue to go on and that Wonder/Wall will go on to morph into different iterations,” Wilder adds. “I hope that more communities of color—artists of color—continue to make an impact at Bay Street, and I hope the reception of that is welcoming. … I’m very excited to see [the diverse history of Sag Harbor] be reflected in the theater.”

Tickets to Wonder/Wall are $20 and are available through the box office by calling 631-725-9500 on Tuesdays through Sundays from 11 a.m.–5 p.m. or 24/7 at [email protected]. Those with disabilities or anyone requiring seating may call the box office to arrange accommodation. Performances are dependent on the weather and will not be rescheduled. Visit baystreet.org for more information.