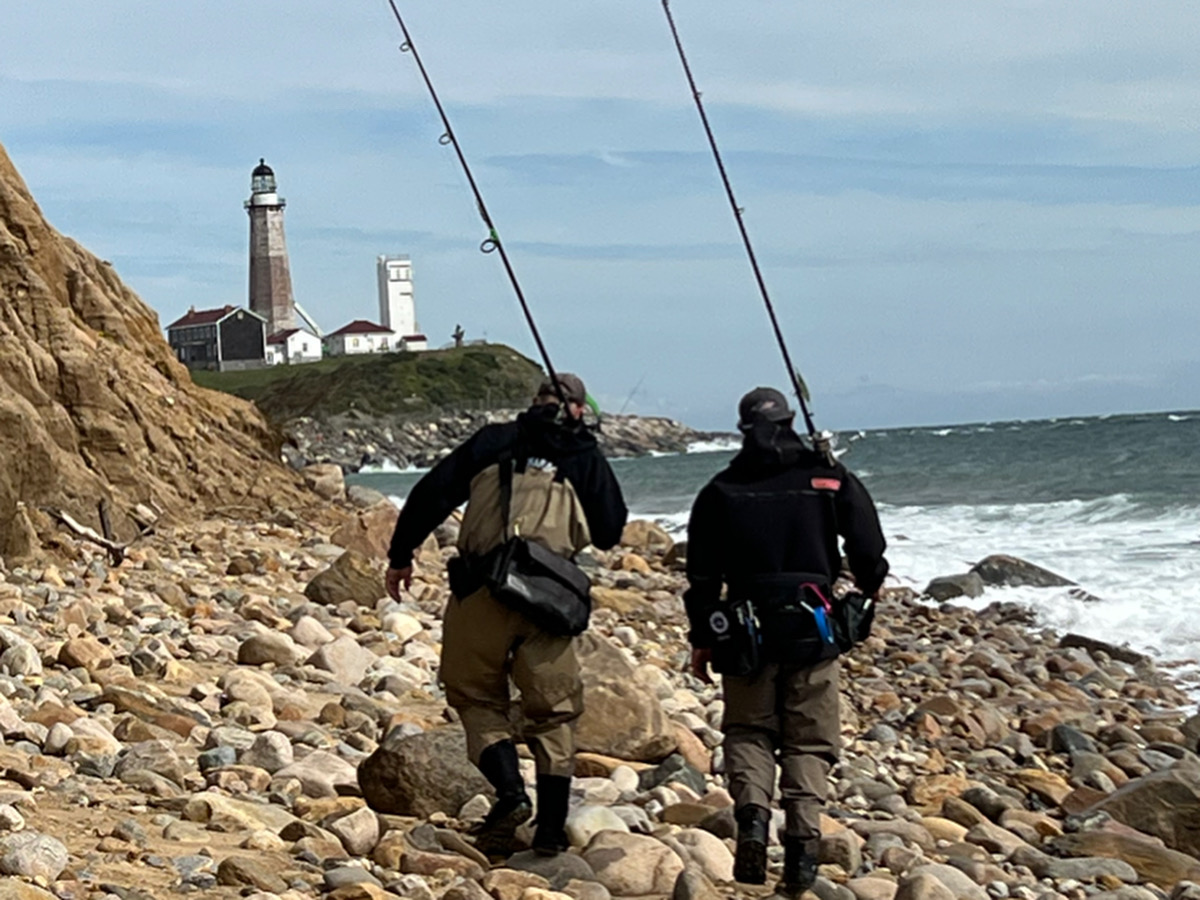 It’s so hard to believe that we’re already looking at November. Thanksgiving is right around the bend and right now I’m thankful for the 29-inch striper I landed a few nights ago. It’s going to be delicious!

It’s been a grind this fall for many surfcasters, and I can tell you that putting in the time has been worth it. Bottle plugs from the beach have been the ticket from Montauk to Jones Beach so you better be packing a few of those, but I’m also seeing some bigguns coming up on a simple A27 diamond jig.

With the storms we’ve had on the South Shore, it was a slow start to this year’s fall run for striped bass, even affecting the Fred Golofaro Memorial Classic fishing tournament in Montauk.

In the catch and release category we have Ryan Rawleigh winning first place with a hefty 41 1/2-inch cow. The legendary Bill Wetzel got second with a 39-inch striper, and Richard Fithian took third with a modest 36-inch fish.

The weather was as nasty as it gets that weekend and many of us left before anyone even landed a single bass. Hats off to these guys for braving the 20- to 30-mile-per-hour winds and wicked rain to land these fish. I can’t wait to fish this tournament again next year. It was a great time hanging with so many great fishermen and having barbecue in the parking lot.

With striped bass season running till December 15 there’s still plenty of time left to land that personal best overslot you’ve been dreaming about. There’s huge bunker schools running up and down the South and North Shores with large hungry fish and even whales having their fill. There is also a bit of time left for sea bass and blackfish. Those seasons run till December 31 for sea bass and December 9 for blackfish. Both are good eating and a bunch of fun to catch.

The boats and charters have been catching their limits out of Montauk when the weather’s cooperated and right now is the best time to book a room for the weekend and fish Turtle Cove for striped bass, or hop a charter for some pelagic action.

Moving west, Shinnecock Inlet has been heating and the bigger fish are slamming bottle plugs, bucktails and top-water plugs out front as well. No need to get to the inlets right now to land a cow as they’re biting right out front at Cupsogue and Smith’s Point.

The locks at Shinnecock have some huge fish coming through early mornings. Get there when they open, then say, “Thank you, Fishing Guy.”

Just be sure to bring a net because you won’t get them big girls up without one.

Remember, folks, we don’t want to damage these beautiful fish as we attempt to land them, so always have a “safe release plan” ready. We all want a great picture with a “monster” and that’s perfectly acceptable, but do it quickly and be sure that your fish pulls out of your grasp. Don’t just drop it back in the water straight away. Hold it in the water upright by the tail moving it back and forth until it swims away strong.

Robert Moses has seen its fair share of slot and overslept striped bass in the last few weeks. Field 5, right in front of the lighthouse, has been a hot spot for many. Some people have been fishing there for years as it’s yielded some large fish and continues to do so. You probably won’t have to walk far to get into some action here and you don’t have to throw the expensive stuff either. Just put on your favorite diamond jig and go for it.

Democrat Point has had some nights with oversized bass running through the inlet as well as out front. Bottle plugs are getting hit on here too, but pick your tide and time wisely as it’s been another hit and miss situation these last few weeks. The next few weeks should produce a steady flow of striped bass as the temperature drops, so be ready to see much more of these beautiful fish around here. Get out there and catch ’em up, people!

I hope you all land your biggest fish this fall, and be sure to do the right thing. It’s an honor system out there so bring a tape measure and treat those stripers with care so we can all continue to enjoy them for years to come. See you next month and tight lines, folks!