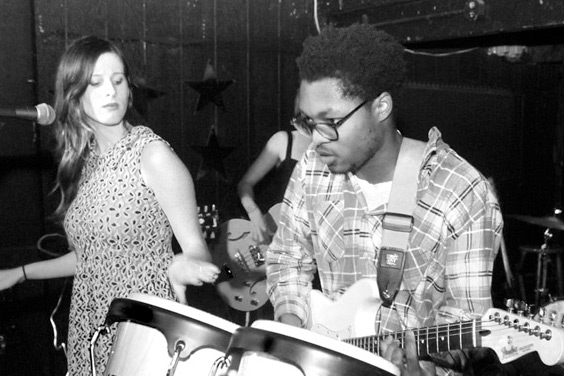 Sasha and Theo Spielberg, the children of East Hampton resident and Oscar-winning director Steven Spielberg and Kate Capshaw, just signed with Hamptons visitor Jay-Z‘s Roc Nation management group. The siblings and musical duo, known as Wardell, released their EP Brother/Sister in March of this year at the South By Southwest music festival in Austin, Texas, and Jay-Z took notice.

With Sasha’s wailing and melodic vocals and Theo’s layered musical stylings, Wardell’s alternative/indie sound is unique, catchy and easy to like. It seems they’ll go far with Roc Nation, which represents a mix of superstars and up-and-comers, including Kylie Minogue, Timbaland, Wale, Mia, Shakira and Rihanna, among others. Jay-Z also has a Roc Nation record label, music publishing house, touring and merchandising, film and television, sports management and his Three Six Zero global management firm, all of which could help boost Wardell’s career in whatever direction it may take.

On his Roc Nation website, Jay-Z points out the fact that Sasha and Theo are brother and sister. “That familiarity and fondness informs the music that they make together, which is at once warm and summery, comfortable and chill as a result of their Los Angeles upbringing. It’s the kind of music you’d expect from two people who grew up sharing a wall, infused with that particular intimacy that comes with a life spent knowing each other,” he explains. “And while they draw from a wide range of influences , they have managed to create a sound that is wholly their own.”

Sasha Spielberg, 23, (the daughter of Capshaw and Spielberg) has already acted in several films, and she and her 25-year-old brother Theo (Capshaw’s adopted him before marrying Spielberg, who also adopted him later) have already made a name for themselves and as Wardell in Hollywood.

Wardell’s single “Opossum” was released to great critical acclaim, which earned them a feature on NPR as Song of the Day. Theo and Sasha are hard at work on Wardell’s debut album, due for release in 2014. Now, who can they get to direct their next video?