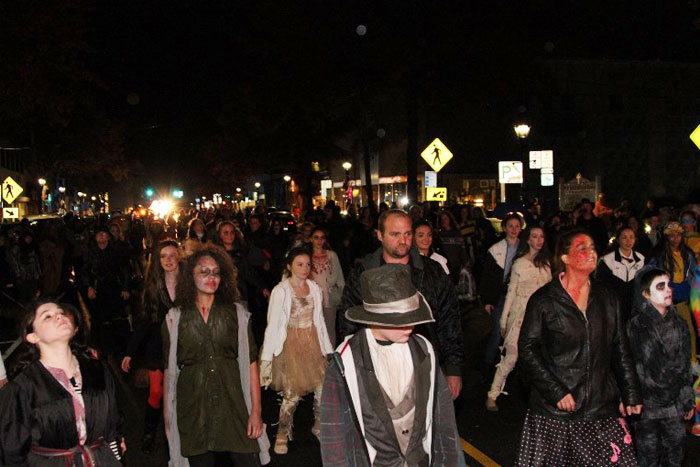 The second annual Edgar Allan Poe Festival is taking place in Riverhead October 30–November 1, with a number of events in store celebrating the icon of American literature.

The festival kicks off with a parade on Main Street Friday starting at 7 p.m. with spooky costumed characters, such as the Headless Horseman, skeletons, scarecrows —“just about any type of macabre creature you can imagine will be in the parade,” festival organizer Sal St. George says. “We even have a hearse coming down Main Street.” Anyone in costume may join the parade, and a flash mob is planned as well.

Then at 8:30 p.m. Friday at Vail-Leavitt Music Hall, seven-time award winning author Kerriann Flanagan Brosky, the writer of Historic Haunts of Long Island, and Joe Giaquinto, a noted ghost hunter featured on numerous television and radio programs, team up for a spirited evening of supernatural tales to reveal what lurks on the streets of Riverhead and beyond. Admission is free.

On Halloween from 11 a.m. to 3 p.m., trick-or-treat stations will line Main Street outside businesses. Then at 6 p.m., the Little Monster Masquerade Party at Vail-Leavitt will feature live performances on stage, ghostly dance routines, audience participation and prizes. Admission is free.

The Mystery Writers of America—the group that honors the best mystery writers with the Edgar Award each year—will be stationed at Dark Horse Restaurant all day Saturday presenting readings and taking about their books and how Poe inspires writers.

The one-act play The Ghost Writers will be staged at Vail-Leavitt noon and 3 p.m. on Saturday and 1 and 4 p.m. on Sunday imagining the first-time meeting of Bram Stoker, Mary Shelley and Edgar Allan Poe.

Sunday at 5 p.m. at Vail-Leavitt, the festival will present a contemporary re-imagining of the classic Orson Wells 1938 radio broadcast of The War of the Worlds. Radio Personalities Cindy Clifford from WALK, Lisa Dabrowski from WLNG, David North from WALK and Walker Vreeland from WBAZ star in this staged adaptation of the classic horror story by H.G. Wells.

At East End Arts, 141 East Main Street, will host a “Haunted Schoolhouse” with spooky stories for kids in a program titled “Ghosts and Giggles.” At the former farmers market building, find the Poe Game Room with Poe Bowling, Poe Bingo and more.