The Addams Family Action Figures to Be Released Early Next Year 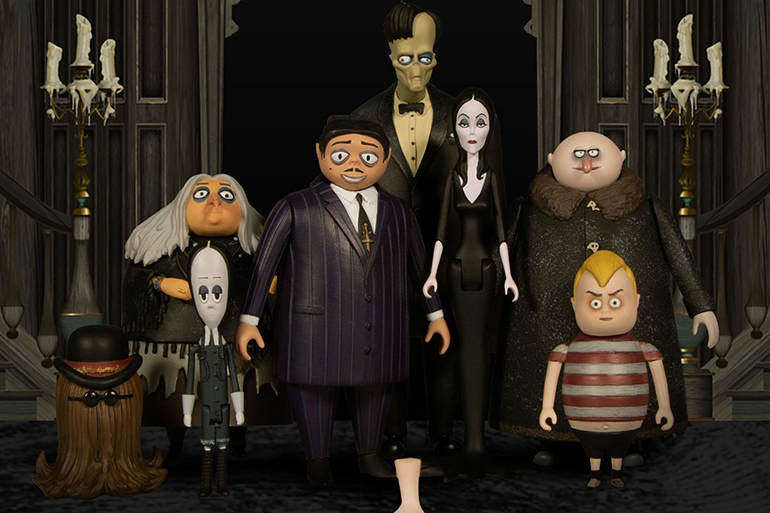 With Halloween around the corner and The Addams Family animated movie in theaters now, late Sagaponack resident Charles Addams‘ famous characters are getting more attention than they have in years. To that end, Mezco Toyz has just announced a brand new line of action figures with likenesses based on the latest film.

Slated to ship between February and April 2020, and listed as part of Mezco’s 5 Points series—because the figures feature five points of articulation, like classic Star Wars figures—the characters come packaged in duos on retro blister cards, which are perfect for display. But what sane person wouldn’t open these beauties?

As listed by Mezco for preorder on their website, the available duos are:

Gomez & Morticia: Gomez a devoted husband and father who lives to lavish affection on his wife and indulge his children’s vices. Debonair in his pinstripe suit and is riddled with explosive energy. Morticia, the cool, calm, and collected center of the Addams Family, wears a long, black gown and is the perfect counterpart to her hot-headed husband, Gomez.

Wednesday & Grandma:  Wednesday, the eldest of the Addams brood adores torturing her beloved little brother Pugsley, wears a collared long sleeve dress and spends her time beheading her dolls and taking care of her pet octopus. Grandma, a totally dishonest woman who thoroughly enjoys cheating at cards, ma wears a shawl over her dress and is smitten with her grandchildren, often treating them to all sorts of monstrosities.

Pugsley & Fester:  Pugsley a menacing 10 year old on overdrive, wears a stripped t-shirt and shorts and is a relentless innovator of endlessly devilish plots. Fester, a good-natured, merry uncle that likes to create mayhem wherever he goes, wears a long, black coat and loves a good bubble bath.

Lurch and It: Lurch, the deeply loyal butler and towering giant, wears a suit and bowtie and is ready to serve. It, the high-pitched, babbling relative that is known for his tortuous amount of swagger, wears his iconic dark glasses and bowler hat and always brings the party wherever he goes.

Each duo set also comes packaged with a different version of Thing, the disembodied hand that is somewhere between a beloved family pet, a valet and a personal assistant.