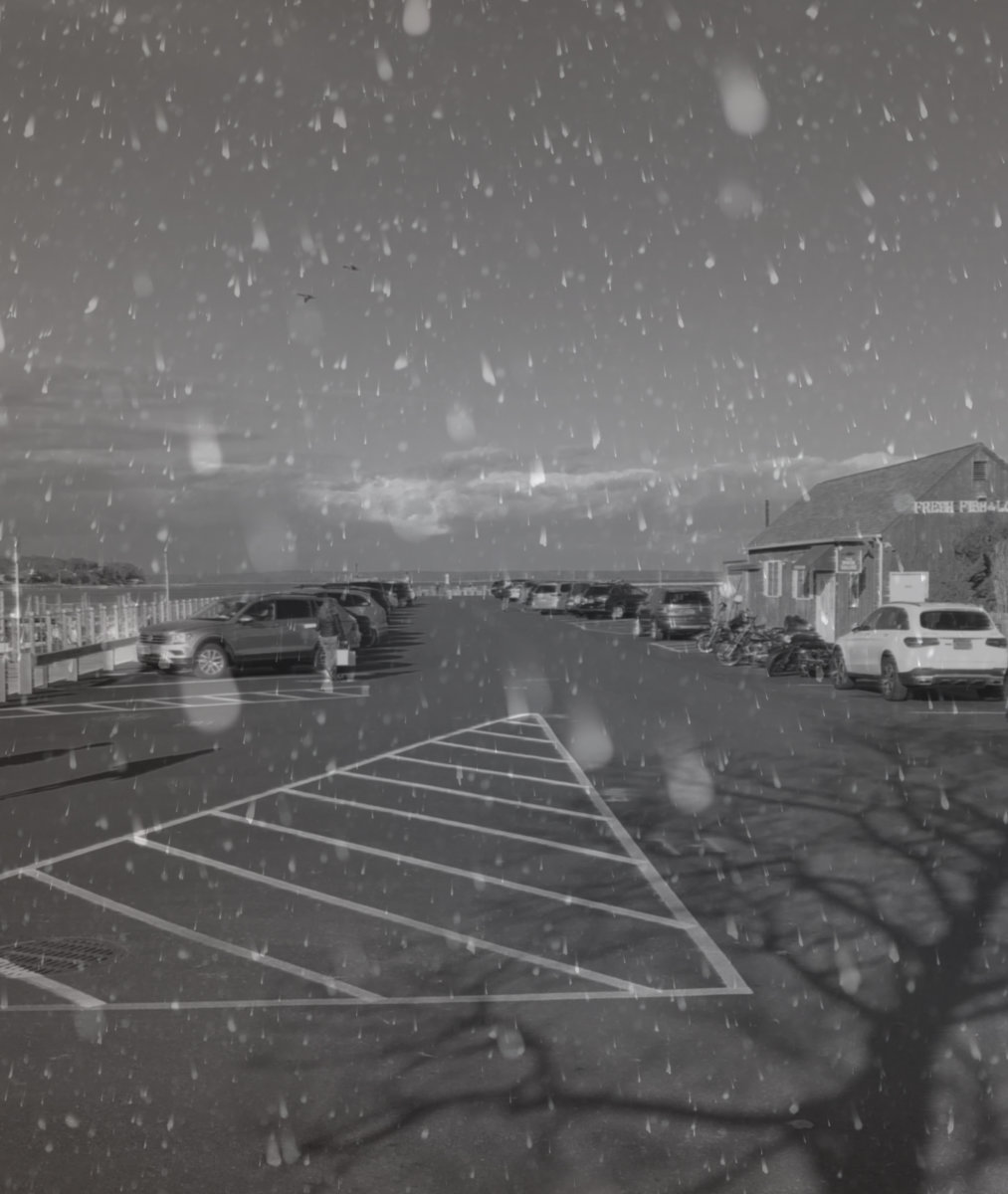 Now that I, Francoise Malon, have conquered Long Wharf, winning the $50,000 offered by Dan’s Papers to the first person to trek to the end of it, alone, I have produced this three-day account of my triumph.

It is February 1 at dawn, and I, Francoise Malon, am at the foot of Long Wharf with my sled, my suitcases, my four Nepalese Sherpas, and my six white poodles. Without further ado, I zipped up my snowsuit, and with the poodles wagging their tails eagerly, climbed atop the sled and shouted “Allons!”

Long Wharf to the tip is 510.3 feet long, according to those who have flown over it and measured it during the few days a year when it is not shrouded in storms. On this morning, visibility through a snowfall was zero. As a result, I moved slowly, just 180 feet through the rest of this day, when, exhausted, I supervised the setting up of my tent alongside Big Olaf Ice Cream at the base of Long Wharf. The smell of hot fudge wafted up my nostrils as well as those of my dogs and Sherpas, but we slept well.

Around 6 a.m. I was awakened by the Sherpas, who, speaking in Sherpa, excitedly told me the gendarmes had given them a summons for illegally sleeping in or alongside a tent on the Wharf. Stupid people. I crumpled up the summons and threw it away.

We packed up and began the march. The snowflakes were now the size of baseballs, causing the poodles, one after another, to yip in surprise when hit, but I was able to calm them by stopping frequently and giving each a half of a Mallomar. And so, we continued, staying in the middle of the wharf so the bitter cold wind that had come up wouldn’t sweep us overboard, as had happened to the Peruvians on their attempt in May 2017.

We passed Ava’s & Around Again Boutique at 11 a.m., Long Wharf Upholstery and Fabrics at 3 p.m., and OMO The Apothecary at 5 p.m. At 6:32 p.m., shivering cold, we passed the final outpost of civilization, Le Bilboguet, the French restaurant, and 10 feet beyond set up our tent for the final leap to the end, planned for the morrow.

The gods unleashed their fury during the night. I could hear the banging of the snowballs on the tent canvas above me and as the wind rose to gale force, I felt pity for the four Sherpas stationed at each of the tent pegs holding things steady. Indeed, in the morning light, I found that one of the four had been swept away. Or had left or something. I don’t speak Sherpa.

But I looked at the upside. The supplies had dwindled and could be carried by three. Furthermore, it would be easier to keep track of everybody in the final dash to the tip. I had my sledgehammer, 2-foot flagpole and the flag of France at the ready. If the poodles could pull double time — and I found them early in the morning, wagging their pom pom tails eagerly — we could get to the tip by nightfall.

The biggest obstacle in the way of course was the Cavendish Crevice. It’s a crack in the asphalt that runs crossways from one side of the wharf to the other and in the horrendous weather, no adventurers before us had yet found a spot that was narrow enough to jump or rappel across. Indeed, it is thought that the Swiss group, having thought they had seen the narrowing, are now all down deep in the earth there, or at least some of them are. But nobody knows for sure.

The gods of the weather and the sea, National Oceanic and Atmospheric Administration and Neptune, respectively, pounded us with ice and snow and gale-force winds as we fought to break camp.  In the end our tent blew away, which meant we’d be unable to camp again — that fourth Sherpa had carried my backup tent — and it was now do or die. And so, with the dogs yapping and the Sherpas singing Xinyxlre Bassexoof, their march of bravery song, we stepped off for the Crevice.

And then, “Hurrah!” At 3 p.m., through the storm, we found the narrowed place in the Cavendish Crevice. We fired a spear and rope across it with our hiker’s cannon, and then each of us, hand over hand and paw over paw, rappelled along under the rope until we all made it to the other side.  Then we trudged eagerly through zero visibility and thunder and lightning until 5:38 p.m., when finally — the discovery was by Poodle No. 5, who barked the Morse code letter “S” — we reached the very end of the wharf.

There, using the sledgehammer, I triumphantly pounded the flagpole stake into the concrete, mounted a French tricolor on it and hummed La Marseillaise into the wind gusts. Nobody heard of course, except for one of the three remaining Sherpas, who applauded softly with his mittens.

And then we heard the pocketa-pocketa of a helicopter overhead. A spotlight from it illuminated us, a rope ladder was lowered, and we were offered rescue by EMTs and Marines from the 114th Airborne Rescue Squad, who, apparently mistaking our rope cannon shot for a request for help, had come to our aid. Exhausted and knowing that whatever we left down there, other than the flag, of course, would be swept away, we accepted and triumphantly climbed up. We owe Marine Lt. Elmer Brackenbush our lives. He flew us safely to the parking lot of a Walk-In in Wainscott.

Thus it was that the next day, all showered and shaved, I presented myself to the officials of Dan’s Papers in Southampton, displayed my iPhone photograph, blurred but nevertheless showing our little flagpole at the wharf tip, and collected the prize money.

Pilot Brackenbush, also there, disputed our claim, said the flag was not on the tip but on the side of the wharf 20 yards from the tip, to which Dan replied that wherever the flagpole was we had won and the contest was hereby over, so no further adventurers could lose their lives.