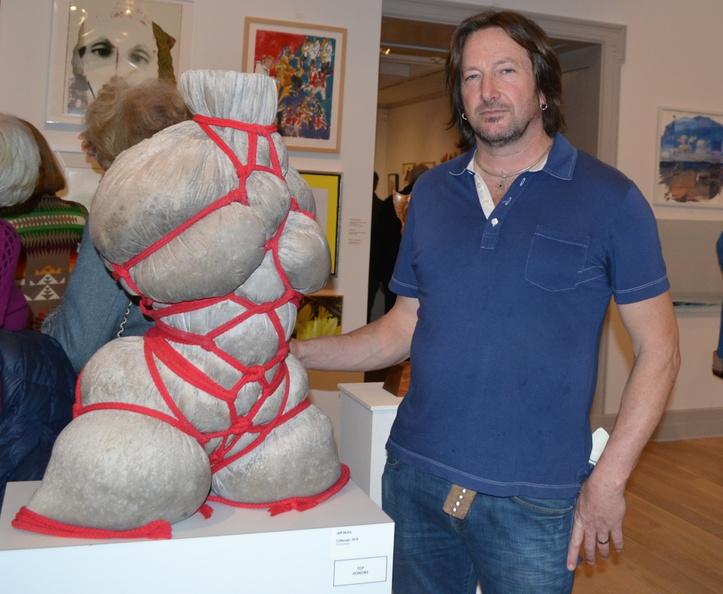 Part of the human experience is coming to the realization that sometimes, no matter how meticulously you plan, things don’t always play out the way you thought they would. That’s one rule that Hamptons artist Jeff Muhs knows all too well. In fact, he’s totally embracing it in his upcoming exhibition, The Uncanny Valley, at Guild Hall opening Saturday, October 30.

Back in 2018, Connie Choi, associate curator of the Studio Museum of Harlem, awarded top honors to Muhs for his concrete sculpture “Callipyge” in Guild Hall’s annual Artist Members Exhibition. The prize was to come with an exhibition in the Spiga Gallery, but that date would get pushed back several times due to “the plague,” as Muhs calls it, and other unforeseeable factors. During that extra time, however, Muhs created two additional concrete sculptures for the exhibition, which he views as the final entries in his long run with the fascinating medium.

“Now, after doing this for 15 years, with the advent of this exhibition, I’m going to take some time to maybe put the concrete aside for a while and explore some other sculptural mediums,” he says. “I’ve completed the series for now.”

In looking forward to the end of an important chapter in his life, Muhs can’t help but flip back to the beginning and reminisce about where this journey started.

His sculpting roots were ingrained in him at a young age by his father, a woodworker, and he’d continue to develop his sculpting chops over many years. Eventually, Muhs put away his chisel to focus on his paintings, which were gaining notoriety. However, that shift in focus would only last about 10 years. While building his Southampton home, Muhs chose concrete for his countertops, a material he was unfamiliar with, and that seemingly trivial decision just so happened to reawaken his eagerness to sculpt like never before.

“What a fantastic material!” he recalls exclaiming.

After working with concrete for some time, Muhs experimented with pouring it into a plastic bag and came to the shocking realization that under the right circumstances, this dense, fluid material could make itself appear as soft flesh. “Well, what is made to hold flesh?” he remembers asking himself. “A corset.”

Muhs began using this flesh-like concrete and restrictive, women’s garments to explore the female form and comment on modern culture’s image of the ideal woman. “Throughout history, that has been one of the main themes through all of art — the Aphrodite, the Venus — those images have been used to portray the ideal of feminine beauty throughout history, and these are my additions to that continuum,” he says of the sculptures now featured in The Uncanny Valley. “Because of the way that I’ve formed them using items from contemporary culture, those items of women’s clothing, that puts the stamp of our time and culture on them.”

By pouring concrete into bags, cloth and feminine molds ranging from corsets to shibari rope, Muhs developed a sculptural process he calls “dynamic free casting.” This allows the concrete some freedom to form its own way, making each finished piece a unique surprise, even to the artist himself.

“When I say ‘dynamic’ that means it’s subject to change with the forces of the concrete, which is very heavy, and when I put it into the cloth it’s fluid,” Muhs explains. “The process itself adds so much to the character of the piece; it’s like after I conceive it, then the process does its thing to create the work.” He adds, “The concrete tends to do its own thing — sometimes it’s very smooth, sometimes it’s very rough, sometimes things completely unexpected happen — so in that, I’ve come to really appreciate the beauty of things that happen by chance.”

The painted works on display in The Uncanny Valley not only complement the themes of his sculptures, they they take inspiration from their dynamic method. The mindset of letting chance have a say in the final product spread from his sculptures to his abstract paintings, and thus, he now allows things to happen organically without erasing or painting over spots that deviate from his original vision.

“In that way, the sculptures have been informing the paintings and influences the direction of my work,” Muhs says.

The Uncanny Valley opens with an artist reception on Saturday, October 30, 3–5 p.m. and remains on view through January 2, 2022, running in tandem with Guild Hall’s Permanent Collection exhibition. Muhs will lead a tour of his exhibition on Friday, November 5 at 3 p.m. and will join Christina Mossaides Strassfield in conversation on Saturday, December 11.