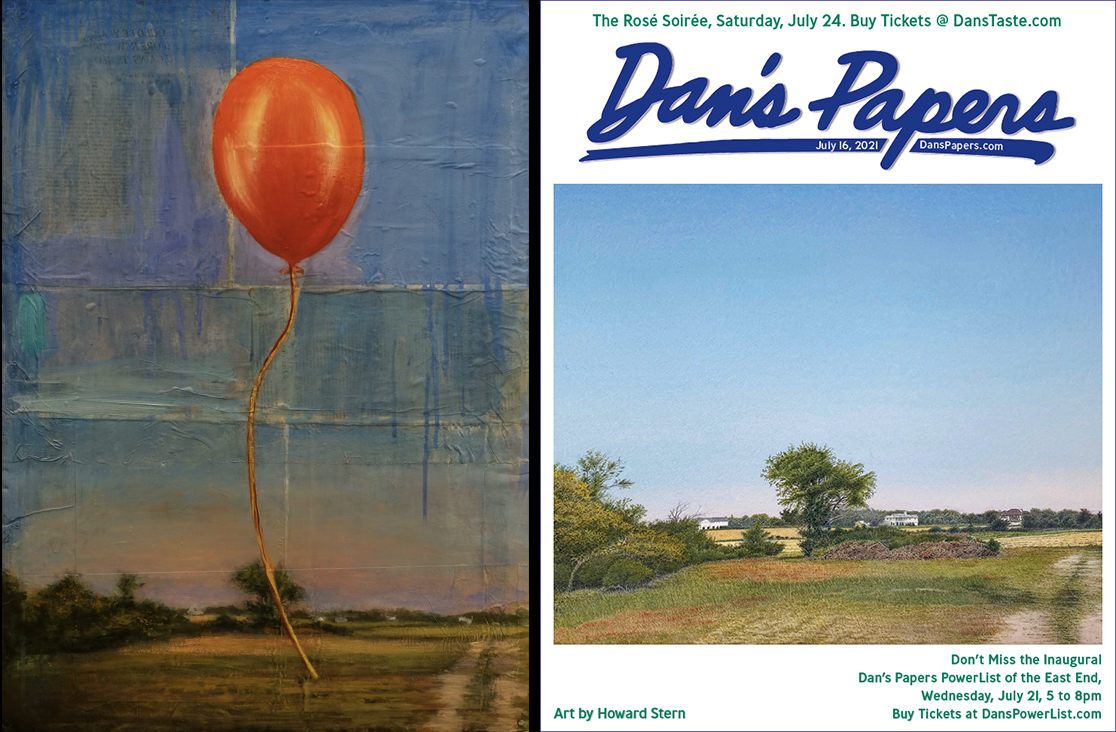 The artworks featured on Dan’s Papers covers hold a special place in the hearts of many East End residents and visitors. Whether it’s simple aesthetic appreciation or something more complex, tangled into feelings of nostalgia and longing for bygone summers, younger days and memories, it’s not uncommon for people to save their favorites. One family even papered their basement walls with week after week of Dan’s covers. And, of course, any local artist will tell you what a thrill and honor it is to be chosen for a cover, to become part of this legacy.

For this innovative exhibition, EEA asked members to look back through the history of Dan’s Papers covers, find one that inspired them and interpret it in their own style. The resulting works span a wide range of media and styles — some directly recreating past covers, while others take the image somewhere quite different than the original.

Dan’s Reimagined is the brainchild of EEA Membership + Gallery Manager Wendy Weiss, who came up with the idea on her own, independently from Dan’s Papers, though owner Vicki Schneps, founder Dan Rattiner and the team were happy to give Weiss their stamp of approval after she shared her idea.

“I wanted to do something really unique that had never been done before, and I wanted it to be something that would be for artists of all mediums,” Weiss explains. “I grew up in Bridgehampton, literally around the corner from the old Dan’s office on Montauk Highway,” she adds, describing her connection to this newspaper. “Dan’s has always been something that’s part of my roots.”

More importantly, Weiss says she ran the concept past some EEA member artists, and they loved it. Among those she consulted was April 20, 2018 Dan’s Papers cover artist Adam Straus, who told Weiss how much being selected for a cover had meant to him. For the show, Straus chose to interpret radio icon and talented painter Howard Stern’s recent July 16, 2021 cover, reproducing the same Deerfield Road (Water Mill) scene in a lovely mixed media piece incorporating Dan’s Papers pages and oil paint, and adding to it a large, red balloon. He titled it “Balloon Over Howard Stern.”

“What’s super cool about this show is that it does have a full breadth of different mediums — we’ve got watercolors, we’ve got oils, there’s a pastel in there, we’ve got 3D installations, we’ll have neon, we have fiber art, we have literary art, where a writer took a cover and it inspired a short story,” Weiss says, also adding photography to the extensive list. “We have a couple of past cover artists participating as well — one of which reimagined his own cover,” she continues, referencing Straus, January 7 cover artist Lisa Claisse and April 23, 1999 cover artist Glen Hansen, who used physical copies of his issue to make a pair of conceptual pieces.

One of Hansen’s interpretations, “Hanksy Original,” follows British street artist Banksy’s lead, shredding half the cover and hanging it out of a frame, just as Banksy did with his 2018 piece “Girl with Balloon” moments after it was sold for $1.4 million at auction. As the gavel dropped, a shredder built into the frame devoured half the painting, causing an art-world sensation. Later, the infamous piece, now titled “Love Is in the Bin,” fetched $25.4 million at an October 2021 auction, making it the highest priced Banksy to date. For his second piece in the show, Hansen cut his art out of his cover and titled it “Appropriate This, Prince,” in honor of controversial appropriation artist Richard Prince.

In an example of a cover going 3D, artist Sherry Davis created two balls of denim scraps, one 14 inches and one 20 inches, after Christopher Lucore’s November 5, 2021 Dan’s Papers cover. Meanwhile, artist Neil B. Young, created a 3.5-inch plaster of Paris sculpture of The Big Duck, which Mike Stanko painted for the December 8, 2017 Dan’s cover. Another artist, Eileen Kelly, painted “The Journey Within,” her acrylic and impasto interpretation of the very first Dan’s Papers cover art, painted by Elaine de Kooning for the September 11, 1987 issue. The list goes on and on.

“It’s just been really fun. Everybody is having so much fun creating things. Some people are getting really kind of obscure, and some people are just using new techniques and new colors,” Weiss says, clearly pleased with the exciting show she’s put together.

“I had read an article about the covers and how (Dan Rattiner) had this idea, and a lot of people thought it was a terrible idea, but he was like, ‘No, I think you’re wrong, and I’m just going to do it anyway!’ And I love that,” Weiss adds. “It’s such a great story of origin for how the covers became what they are. I thought that was super cool, and had he not had that grit, it never would’ve been what it is. It definitely supported the inspiration for the show.”

As Weiss explains it, Dan’s Reimagined pays tribute to Dan and all the artists who have graced the cover of this publication over the last 35 wonderful years.