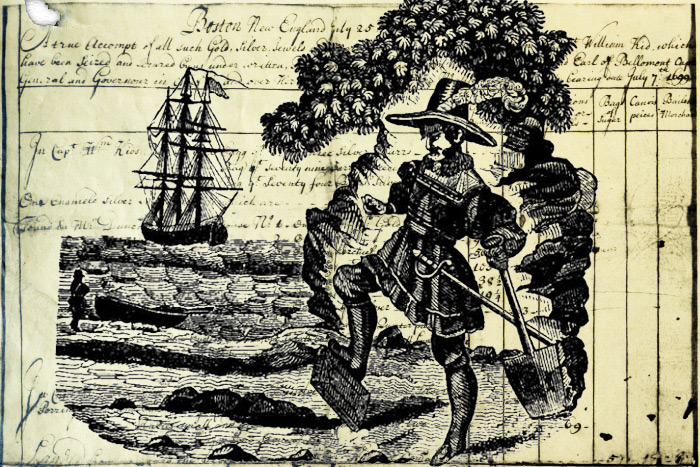 Captain Kidd depicted in “The Pirates Own Book” by Charles Ellms and the receipt for his Gardiner’s treasure, Courtesy of the East Hampton Library, Long Island Collection

In 1699, the pirate Capt. William Kidd had treasure buried on Gardiners Island, the private island located between the Twin Forks. It’s a true story, but the fact is that Kidd never did it. Instead, he got the owner of the island, Jonathan Gardiner, to bury it somewhere secret on the island. Kidd didn’t want to know where. Why, you will soon see.

Kidd accomplished this artfully. He anchored his small sloop just offshore the island and waited. After two days, Gardiner, accompanied by some of his farmhands, rowed out to find out why the sloop was there.

Captain Kidd welcomed Gardiner aboard and introduced himself in a friendly manner. Gardiner had never heard of him. He inquired about Gardiner’s family and whoever else was on the island. So Kidd then told Gardiner he was on his way to see the governor of New York, his friend the earl of Bellomont.

But before departing, Kidd wanted to trade with Gardiner. He gave Gardiner three young slaves to keep, two boys and a girl, to take ashore. He gave Gardiner and his wife other gifts. For himself, a box of gold and a bundle of quilts. And for his wife, some Oriental muslim fabric.

In return, Kidd asked if Gardiner could spare six sheep and a barrel of rum. Gardiner and his men rowed the gifts to shore, then returned with the sheep and the rum.

Gardiner, looking through the window of his manor house, saw Kidd’s men rowing in. Could Gardiner come back out? He could. There, Kidd said he’d like to pay for the sheep and rum. Gardiner said he was owed nothing.

With that, Kidd showed Gardiner this huge treasure he had below decks. Could Gardiner take it and bury it on the island to keep it safe? Kidd would come back to get it after awhile.

Then Kidd said this: If it was not there when he returned, he would kill Gardiner and his family.

Of course, Gardiner took the treasure and did exactly what he was told to do. Later that day, Kidd sailed off.

Here, exactly, was what Gardiner buried. He wrote it down.

Historians are pretty sure they know why Kidd wanted it done this way. The King of England had declared him a fugitive and would pay a bounty to whoever caught him. Then the King would hang him. And Kidd knew this.

Kidd’s only hope was Lord Bellomont, his friend and backer. He’d tell Bellomont where the treasure was. But not exactly. Then, he’d bring Bellomont to the island and John Gardiner would give the treasure to Bellomont. With that, Bellomont would protect Kidd and keep him safe.

But Kidd never came back. Eventually, Gardiner learned that Bellomont, fearful the King would arrest him too, had Kidd seized, arrested, then sent to London where he was tried, convicted and hanged. He was 47.

With that, Gardiner wrote to tell Bellomont he had the treasure. He wanted no part of it. Come and get it. Soon thereafter, soldiers came to Gardiners Island, confirmed Gardiner’s accounting of it (which is how we know this story,) and took it all off his hands. The treasure went back to London.

Today, as then, Gardiners Island continues as a private island owned by descendants of the Gardiner family. You do not go to the island today unless invited by the owners.

Kidd lived a fascinating life. Born and raised in Scotland, he went off to sea as a teenager on a privateer’s ship out of London. Privateers were supposed to steal back bounty from pirates. In the course of things, fellow crew members mutinied, and, at 25 years of age, elected Kidd captain. Changing the name of the ship to Blessed William, (after King William) Kidd continued as a privateer and took treasure not only from private ships, but also French ships. England was at war with France at that time.

Five years later, Kidd sailed to New York City. His crew disbanded and he left off privateering to become a dashing young member of that town’s upper crust. Among those he befriended was Governor Bellomont. Soon afterwards, at 27, he married Sarah Bradley Cox, the richest woman in the City of New York. Kidd’s funding helped build the Trinity Church in New York.

Four years later, Lord Bellomont asked Kidd to return to privateering. Bellomont and six others would partner in the venture and share the booty Kidd brought back. Among the investors, Kidd believed, was the King of England, who would be getting 10%. Kidd couldn’t refuse. He’d be branded disloyal if he refused. As their ship, built in London, was now completed, Kidd was sent there to retrieve it.

Between 1695 and 1699, Captain Kidd boarded and plundered ship after ship. At one point, in Antigua, Kidd’s crew threatened him if he didn’t attack a particular Dutch privateer headed up by an English captain. When he refused, they quit, taking much of the booty with them. Kidd then sold the King William and with the money bought a 284 ton 34 cannon ship he called the Adventure Galley. But when a British Navy ship tried to impress 30 members of Kidd’s new crew into military service, he refused. With that, the King declared Kidd a pirate, not a privateer. A price was put on his head.

Kidd fled to the Caribbean, abandoned the Adventure Galley, bought a sailboat, and with the treasure on board raced back toward New York hoping to get protected by Bellomont.