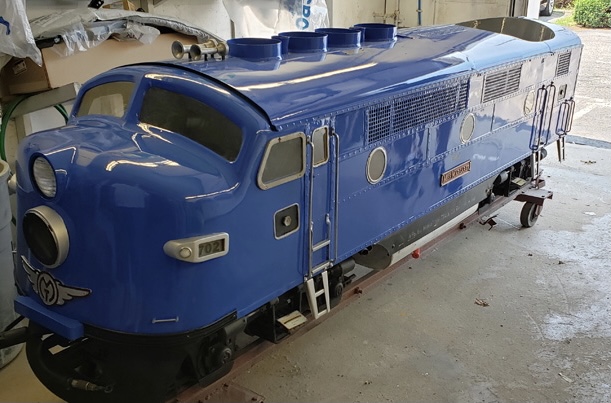 The Greenport Express is picking up steam.

On October 15, the Rotary Club of Greenport hosted a groundbreaking ceremony to kick off construction of a station house for the miniature railroad it is building to revive a storied Greenport tradition.

From 1985 to 2012, Greenport resident Frank Field gave rides to the public on a miniature railroad that he built near his home. Like many Greenport residents, Rotary members have fond memories of taking their children and grandchildren to ride Frank Field’s train, and, for several years, the club has worked in partnership with the Village of Greenport to build a new railroad in the woods near Moore’s Lane.

“As a Rotary Club, we want to try to promote and keep the traditions that have made Greenport a special place to live,” says Richard Israel, who chairs the Rotary’s train committee.

Israel’s kids grew up riding the train, especially on Halloween. “Everyone would go trick-or-treating, and then take a ‘spooky’ ride on the train afterward.”

The railroad revival project was launched by the late Joe Cherepowich, a longtime Rotarian who had fond memories of taking his grandchildren to ride Frank Field’s train on Sundays.

Cherepowich “was very active in the Greenport community, always trying to make it a better place however he could,” says his daughter, Heather Walker. “He believed bringing back the miniature railroad would provide families of all ages with a fun activity in our village for generations to come.”

The train was nicknamed the Joe Cherry Choo Choo in honor of Cherepowich, who died three years ago from pancreatic cancer.

Walker, a Rotarian, is helping advance her father’s project and is pleased to see it moving to the next stage after many challenges, including a drawn-out approvals process and, since the pandemic began, rising costs of materials, limited access to workers and a longer than normal wait for supplies.

“We had a few bumps especially due to COVID-19, but our amazing group of Rotarians never stopped chugging along,” Walker says. “We are getting close to the finish line.”

Approvals have been secured from the Department of Environmental Conservation and the village, the train engine and three passenger cars have been acquired and restored, the track and railroad ties have been secured, the path has been cleared and the station house has been designed.

Greenport Express Is a Community Effort

“The community as a whole has pitched in to support this project,” Israel says. “There’s a tremendous list of people who have asked what they can do. People have donated money, railroad ties and stone. An electrician offered to do all the wiring for the building.”

The next steps for the Rotary are to build the station house, lay tracks and continue fundraising. According to Israel, the Rotary still needs to raise $250,000. But two donors recently offered to match donations up to $125,000, thus doubling the impact of gifts up to that amount.

The Rotary is also seeking volunteers from various trades, such as carpenters and plumbers, to help with Greenport Express construction.

Following Saturday’s groundbreaking ceremony, the plan was to start digging the foundation on Monday for the station house, where people will buy tickets and board the train. The station house will be approximately 2,000 square feet and include a community room, which Israel says can be used for various exhibits and educational programs, along with storage space for the train and public restrooms.

“The station house is near ball fields and a skatepark, and there are no bathrooms nearby, so we are happy to be able to provide them,” Israel notes. “When the Rotary was founded in Chicago in 1905, one of its first projects was to build public bathrooms. So that hit a chord for us Rotarians.”

The railroad will serve as a family-friendly attraction to draw people to Greenport, similar to the village’s renowned antique carousel, Israel says.

“It will eventually pay for itself through ticket sales and it will not cost the village any money,” he adds.