Julia Gardiner, John Tyler, the White House and the Princeton 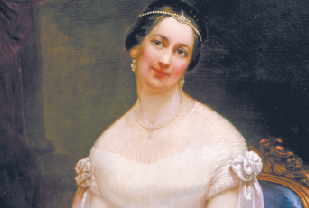 I thought in honor of Valentine’s Day I would tell the story of the greatest love affair in the Hamptons, ever. It is the story of Julia Gardiner, the stunningly beautiful young woman born and raised in East Hampton who was proposed to by President John Tyler, a widower, when she was just 22—she refused—and then 12 months later, in the aftermath of a terrible tragedy aboard a ship that killed her father and nearly killed her and the President, finally fell for him and agreed.

He was 30 years older than she was. The age difference was so dramatic between the two that the President insisted that they be married without any prior announcement. The ceremony was held privately at the Church of the Ascension in New York City, and though most of Gardiner’s immediate family were there, some of President Tyler’s children—he had eight from a prior marriage with Letitia Christian—knew nothing about it until the two returned to the White House and made the union public. One daughter, according to Julia, never forgave either of them.

But the country, after recovering from the shock of the marriage, embraced this beautiful young woman as the President did. It was a stunning love affair. At one presidential ball attended by 400, she told one guest that “nothing appears to delight the President more than to hear people sing my praises.” She also founded a tradition that endures to this day. Whenever her husband walked into a room, she insisted a band play “Hail to the Chief,” and they did.

Also, this love affair lasted all their lives. She bore him seven children. In a poem she wrote for his 62nd birthday, she declared, “what e’er changes time may bring, I’ll love thee as thou art.” When he died in 1862 in the Exchange Hotel in Richmond, Virginia, she was there. And when a quarter century later she suffered a stroke in Richmond, she asked to be taken to the Exchange Hotel to die in a room near to the one where her husband had died. She is buried with him in the Hollywood Cemetery in Richmond.

John Tyler was born in 1790 in Charles City County, Virginia, one of the three sons of a man who was a lawyer, a country gentleman, and for several terms, a state legislator. He owned a 1,200-acre plantation worked by 40 slaves. His father went to the College of William and Mary. John went to William and Mary.

At 19, John Tyler, having apprenticed with his father at his law firm, was appointed to the bar by a local judge who forgot to enforce the law that you had to be 21 before you could become a lawyer. When John’s father died, John inherited his father’s plantation and had a career that far exceeded that of his father. He was not only a state legislator, he also became the Governor of Virginia and, later, a United States Senator. At the age of 46, he was nominated for Vice President of the United States by the Whig Party, but lost.

All indications, however, either in Virginia or in Washington, were that John Tyler was a courtly man, had many convictions, was incorruptible, and was a man of action. Unfortunately, his convictions led him most often in the wrong direction. For example, as a slave-owning plantation owner, he fought all attempts to free the slaves, saying it was a bad practice but over time could be phased out. He was a fierce supporter of States rights. When the federal government wanted to build federal roads in Virginia, Tyler, as Governor, told them Virginia didn’t need any handouts from Washington. They got no roads. The rest of the country did.

When a plan was put together to form a federal bank, he said Virginia should fight the interloper. He lost. When he was a senator, Missouri wanted to join the Union, but nobody could decide if it should be a free state for the North or a slave state for the South. When Congress worked out a compromise, Tyler voted against it, saying many slaves would move to Missouri and there would not be enough in the South to pick the crops. But it passed anyway. People did think he would make a good vice president. Vice presidents were in charge of nothing and Tyler was a nice man. But in the end, when Tyler became president, the Whigs became so angry at him they voted him, a sitting president, out of their party. He made a brief attempt to get himself nominated in the election of 1844, but when it became apparent that was going nowhere, he withdrew.

In the run-up to the Presidential election of 1840, the Whig party did nominate him to run for Vice President again. It would be safe enough. Although Tyler had supported John C. Calhoun for president before that party’s convention—Calhoun had little other support—the party nominated William Henry Harrison, who owned a plantation just down the road from Tyler. Harrison then suggested he run with Tyler and they did, two Virginians, with the slogan “Tippecanoe and Tyler Too.” And they won.

Though the election was in November, in those years the swearing in did not take place until the following March. Harrison had been quite ill between November and March, but he decided that he would show what a robust fellow he was by having his swearing in on the White House steps in the middle of that hard winter without an overcoat, after which, still without the coat, he would make a long speech. Afterwards, he caught pneumonia, and, one month later, he died. Thus, Vice President John Tyler became President of the United States.

At the age if 19, she posed on the arm of a young gentleman she did not know to have her picture published in a magazine advertisement for a middle-class department store in New York. “I’ll shop at Bogert and Mecalmy’s, No. 86 9th Avenue. Their Goods are Beautiful and Astonishingly Cheap,” read the caption. Her family was so shocked, they immediately had her whisked off to Europe to tour the continent and put some sense in her head.

Julia’s father, the wealthy David Gardiner, was often in Washington, and he and his family were presented to President Tyler at the White House at the start of the social season in January of 1842 at a time when Tyler’s first wife, Letitia, was gravely ill after suffering a stroke. Tyler was very taken with Julia, who was then 21. (Letitia died in September). Gardiner also took Julia to various balls and receptions. She was so beautiful and high-spirited, she charmed everyone. At one such ball a year later—a masquerade ball—President Tyler took her aside and proposed to her. She said no, no, he couldn’t be serious. He was 30 years older than she was.

Some historians say that an explosion aboard a naval cutter cruising the Potomac in February, 1844 was the most traumatic event in American history prior to the assassination of Lincoln.

The ship, the Princeton, had been finished the month before. On board for its first fitting out voyage down the Potomac and back were over 400 partygoers, including the President of the United States, military officials and all members of his cabinet. Among the other guests were David Gardiner of East Hampton and his daughter. At a certain point, the captain was persuaded by the partygoers to fire the big cannon onboard—it was called “The Peacemaker” and was the largest gun in the world at that time—and after two thunderous cannonades, many, including the President, went below to make a celebratory champagne toast to Secretary of State Abel P. Upshur, who just a few weeks earlier had successfully negotiated a treaty that would bring Texas into the Union. One of Tyler’s sons was raising a toast to celebrate that accomplishment—Upshur was up on deck—when a terrible explosion occurred up top, sending all below running up the gangway.

The cannon had exploded with the shell still in its breach. About 100 people were standing around it. Six people died instantly, including Abel Upshur and David Gardiner, but not his daughter Julia, who was at the back of the crowd. President Tyler arrived on deck just as Julia, hearing about her father, fainted dead away. President Tyler ran to her, picked her up and carried her below, where he comforted her and told her he would never leave her, and, by her account, that is when she said she fell in love with him. The private wedding in Manhattan took place just four months later, on June 26, 1844.

Julia just loved being First Lady, even though, as it turned out, she would only be First Lady for 10 months. At the Whig nominating convention that summer, the party refused to nominate Tyler. They went with Henry Clay, who lost to Democrat James Polk, who won. And Tyler retired to his plantation.

There is a record, after his retirement, of he and the former first lady visiting East Hampton on September 25 1845. It is in a journal written by a resident of that town at the time.

Julia and the former president lived at Tyler’s plantation until his death in 1862. Between Tyler’s two wives, he fathered 15 children, by far more than any other president in history.

During her brief stay in the White House and afterwards, Julia, influenced by her husband, became an advocate of the Southern cause. It worked for them. Tyler held office at the state level for a while. In 1861, with civil war looming, Tyler sponsored and presided over the Washington Peace Conference, going to Washington to save the country from civil war by working out a compromise withPresident Lincoln. But nothing came of it. When war did finally come, Tyler joined the rebels, the wrong side. He was a Virginia delegate to the Confederacy during that failed attempt to split the country, but then took ill and died about 10 months after war began.

After Tyler’s death, Julia, still a believer in the Confederate cause, retired to the plantation for awhile, then moved to Staten Island to live in more modest circumstances. On Staten Island, locals raided her house after President Lincoln was assassinated, because they believed she’d been flying a Confederate flag in the backyard. Having been in financial hardship since her husband’s death, she petitioned the U. S. Congress for a presidential widow’s pension like the $3,000 a year Mary Lincoln began receiving in 1870, but it took until 1881, and Congress only granted her $1,200 a year. In 1882, they increased it to $5,000 for all four living presidential widows—Julia Tyler, Mrs. Garfield, Mrs. Lincoln and Mrs. Polk. Therefore, Julia Gardiner Tyler was able to live her final years in Richmond in respectable circumstances.

Few know of this story, because President Tyler is a little known president. He served just three and a half years. And historians rank him near the bottom of the list.

Julia Gardiner Tyler was, however, another matter.