World War Z: Watching Zombies While Heading to the Hamptons 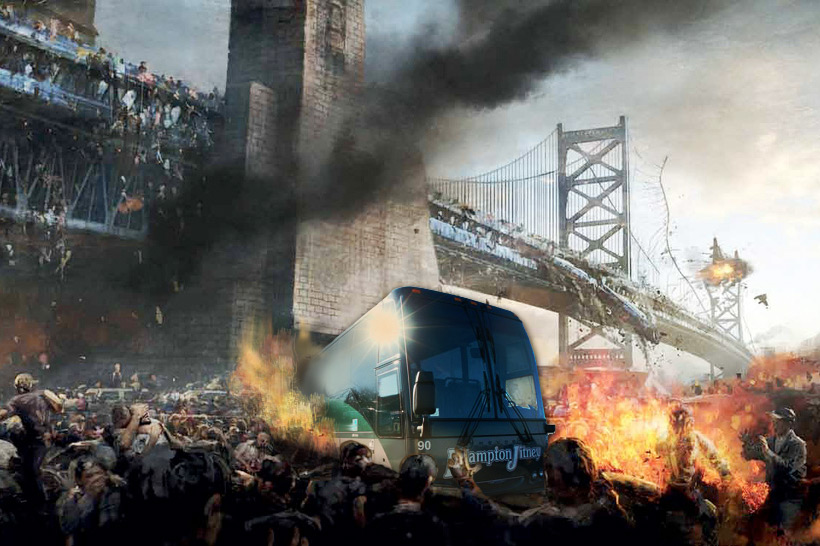 My favorite place to write stories for this paper is on a laptop at the beach. My second favorite is on the Hampton Jitney, which I use twice a week, traveling back and forth between the Upper East Side of Manhattan and Southampton. It takes two-and-a-half hours to get from 86th Street to the Southampton stop, which gives me quite enough time to write these stories, which are usually 1,000 words.

Loud talking is not encouraged on the Jitney. Talking on a cell phone is only permitted for an emergency. There’s a hostess who brings you drinks and snacks. It is, frankly, the kind of quiet time that’s getting harder and harder to come by these days. And this is what I need to write.

An alternative to writing, if I’m not in the mood to write, is watching a movie. They show movies on their deluxe service, which is called the Ambassador. And the movie starts, of course, when everybody gets on, since they don’t want anyone to miss the start, which means that since they stop at 70th Street and 59th Street and 40th Street to pick up customers, they actually begin that service when they leave 40th Street to head out through the tunnel to Long Island, which is half an hour after they leave 86th Street.

Last Thursday morning at 10 a.m., I got on the Ambassador at the usual spot. My mood was that if it was a good movie, I’d watch it. Otherwise I’d write. The movie was World War Z, which came out this summer and people had recommended I see, which I had not. And so, at 40th Street, I unplugged my earphones and re-plugged them into the jack on the backseat in front of me to hear the sound and I waited for it to begin. If it was lousy, I’d unplug and write. If it was good, I would stick with it.

In the opening scenes, Brad Pitt is with his wife and young children in a car in Philadelphia driving along bumper-to-bumper in a traffic jam when suddenly there are explosions ahead and some crazy people who are zombies running around amongst the cars trying to reach in and bite people.

I was about to shut this off when it suddenly turned out that this was going on all over the world and Brad Pitt, an adventurer who had served working the United Nations in Afghanistan, Bosnia, Iraq and Kosovo saving lives is now needed on an aircraft carrier offshore where there are no zombies. Only he can save the world.

Now I know, dear reader, that you are a very smart person and so would not deign to watch a thriller, especially about zombies, but this one got me. It was somewhere between War of the Worlds, Independence Day and Die Hard, all of which I liked very much.

We were now on the elevated Grand Central Parkway going above that cemetery in Queens, and the thought occurred to me: Would I be able to see it to the end? Almost always, movies on the Jitney end before you get to Southampton. But if they run over two hours, of course, you are out of luck. There’s nothing they can do other than start it earlier before everybody gets on, which they will not do. I’m told they look for movies under two hours. I went online and looked up this one. It was an hour and 55 minutes long. It also got about 80% on Rotten Tomatoes.

So Brad Pitt, who does a great job with this fantastic role, goes into the conference room on this aircraft carrier where there are generals and secret agents and everybody is watching surveillance cameras all over the world where the same thing that was happening in Philadelphia is happening everywhere. A young Harvard grad student explains what’s happening. This is a worldwide pandemic. Somebody got bit somewhere, got infected, turned into a zombie and bit others who turned into zombies who bit others and now are in the process of infecting the world. However, about one person in 100 survives the carnage. The zombies just pass them right by. Why? These people must have some antibodies that make them immune. The only hope is to find such a person, take them into a lab, find out what’s different about them, make the serum, and get everybody on earth injected. That will solve the pandemic. And the only person capable of finding such a person amidst all this carnage is Brad Pitt. Pitt says he won’t go. He’s a family man now. A general says, “You have to save the world.” Brad Pitt changes his mind. There’s a tearful scene where he says goodbye to his wife and kids. They are going to be kept on the aircraft carrier safe while he’s away. His wife is given a cell phone. He’ll call her once a day, wherever he is.

We are now passing Great Neck. We’re a half an hour out of Manhattan.

During the next hour, Pitt and a band of heavily armed Marines fly off in a cargo plane headed for North Korea, which is hinted by people there to be the place where the pandemic began. It turns out not to be so and, in the end, huge mobs of zombies attack seeking humans to bite and Pitt and the Marines only barely escape down the runway with a zombie or two leaping up at the rudder.

We are passing Huntington.

Next, the Marines and Brad Pitt go to Jerusalem. Israel is keeping the zombies at bay behind walls and they land safely at the Jersualem airport. Oh, I forgot to mention, this young Harvard scientist is along when they leave the aircraft carrier, but he gets killed in North Korea. Pitt is alone. My belief is that the Hollywood moguls were afraid he was going to steal the show. He was—until he got eaten.

Anyway, they land in Jerusalem and are escorted to one of the walls, but at that moment, these herds of zombies on the other side of this 30-foot wall have climbed up one upon the other and like a swarm of ants are now pulling themselves over the wall and down into Israel and the havoc begins again, and once again the Marines and Pitt barely get out alive. On the way out, however, there is this Israeli soldier, a woman, who’s fighting with the zombies with her machine gun and they get close enough to bite her hand. But nothing happens to her. Pitt now intervenes, cuts off her hand so the bite won’t get into the bloodstream, and scurries her back to the helicopter and they are off for India.

There’s a scene at an airport in India. The cinematography is really great. Now we are passing Manorville. We are 45 minutes from Southampton.

Much of the Indian scenes show Pitt and the Israeli girl running through the back streets of India, and they don’t find anything and so get back to the helicopter, but the zombies get out onto the airport tarmac before Pitt arrives in his helicopter and he and the Israeli girl with the bandage (that Pitt has put lovingly on—“Are you a doctor?” “No, but I’ve had experience in Afghanistan with these things”) can only watch as the plane takes off without them. And so, with their Marines, they get in front of a commercial aircraft with BELARUS AIRWAYS on the side that’s about to take off, and they stop it, get it to open the door and Pitt and the Israeli girl get inside and they head off for Ireland and this lab that might have a serum that would make people moderately ill and not tasty enough to be eaten by the zombies.

This is a triumph of filmmaking. I’m sitting on the edge of my seat. We are passing Westhampton. I look at my watch. We are scheduled into Southampton at noon. But we are at 11:40 a.m., running about 10 minutes early. Will I get to see the end?

Now they are in the lab. There are no zombies in this part of the lab. But in the other part, where the serum is, the zombies are in control. To get to the serum, somebody is going to have to sneak in there, not making any noise, and get the serum out of the lab. If they make noise, 60 zombies, former lab assistants, will attack them and eat them. Can they do it?

“We are approaching the Southampton stop,” the attendant says.

I pack up. Pitt and the Israeli girl and another man from the lab (who has remained human) are sneaking in. They’ve gotten in. But the zombies hear them and chase two of them back to where there are no zombies. Only Pitt remains. But a final zombie is just outside the glass door, eager to get at him. What will happen? Pitt grabs the metal box with the serum. But if he goes out that glass door he will be eaten. We’ve come to a stop. People are getting off. I know. Pitt? Pitt? Give yourself an injection with the serum. Then he won’t bite you.

As I come down the aisle toward the front of the bus, I see on the screens that Pitt is going through drawers looking for a hypodermic needle. The zombie is waiting. And now I know how it will end.

I get off the bus just so happy.