The 106th: Pararescueman from ‘The Perfect Storm’ Talks in Westhampton October 22 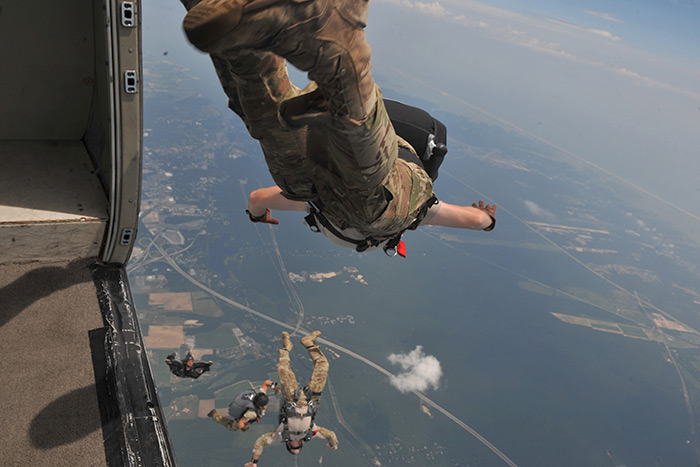 In one of the dramatic scenes in the movie The Perfect Storm, a rescue helicopter appears, hovering in the wind and rain over the 80-foot seas—possibly the largest seas ever off the Northeastern shore—so its occupants can attempt a daring rescue of two women and a man aboard a 30-foot sailboat that has foundered down below.

There are five men aboard this helicopter—Lt. Colonel Graham Buschor, it’s co-pilot, Lt. Colonel David Ruvola, the other co-Pilot, Jim Mioli, the flight engineer, and two pararescuemen, John Spillane and Rick Smith. Over the foundering ship, Spillane and Smith fearlessly leap out of the chopper carrying 110- pound packs on their backs, splash into the water and proceed to put the three victims into baskets that have been lowered by cable. Then, above the rolling, violent seas, the victims are choppered over a nearby Coast Guard ship and lowered down to safety.

Of course, this story is not over. The chopper returns and with the same rescue method, cables up the pararescuemen.

But now the chopper is running low on fuel. An attempt is made to conduct a mid-air refueling with a propeller driven Hercules four-engine refueling plane that comes over. But the wind is so high, the effort fails. They try again and again to link up, but in the end, the helicopter goes down into the ocean. And though four of the five men onboard are rescued from these enormous seas by the Coast Guard cutter, the fifth man is lost, never to be seen again.

Of course, there are other dramatic activities going on in this monster storm—indeed, the main plot of The Perfect Storm is of the men aboard the Andrea Gail fishing boat, out of Gloucester, Massachusetts, who are also never seen again.

At the time I saw this rescue scene, however, I was so struck by the utter coolness of the pararescuemen. I also thought that this was a work of fiction. After all, there really was no way of knowing what went on during the last hours of the fishing trawler out of Gloucester, which provides the main storyline of this film. How could they know accurately what had happened with the rescue helicopter, the pararescuemen and the civilians in the rescue going on nearby?

Well, they could. And that is because the daring rescue described above was logged into a ledger at the end of the day at the 106th Rescue Wing headquarters in Westhampton Beach, from whence the helicopter and the Hercules had come. There were a few modifications and liberties taken by the filmmaker. There were actually two separate rescue operations in the churning sea when the alarm went out at headquarters at Gabreski Airport. The filmmaker had the whole script of both of them to work with. And the only casualty was Pararescueman Rick Smith, of Westhampton Beach, who died doing his job.

Most people on the East End are unaware that this military rescue group, consisting of probably the most highly trained personnel in our armed forces, have one of their three stateside Group Headquarters here in Westhampton. Occasionally, you will see the big, grey four-engine propeller Hercules aircraft lumbering around over the Hamptons and you will look up and figure they must have some sort of novice pilot training operation here. The planes do touch-and-go landings, circle around over the ocean, sometimes cross the paths of a helicopter going here or there. The helicopters, many people think, are up in the sky to bring officials out to the Hamptons, or rich people from New York out for the weekend. That is not what is going on.

Pararescuemen, or PJs, as they are called, receive an extreme basic training at Lackland Air Force Base in San Antonio, Texas, then combat ocean diving and underwater rescue training in Panama City, Florida, parachute jumping in Fort Benning, Georgia, High Altitude Low Opening (HALO) parachute jumping in Yuma, Arizona, two and a half weeks of basic survival training at Fairchild, Washington and underwater aircraft egress training in Pensacola, Florida and one year at Kirtland Air Force Base, New Mexico.

At the end of all of this, PJs are fearless in 60-foot seas or under enemy fire, and proud recipients of the maroon beret, which signifies the blood sacrificed and the devotion to duty of aiding others in distress.

It should be noted that the PJ’s are the most highly decorated Air Force enlisted force. They’ve been awarded one Medal of Honor, 13 Air Force Crosses and over 105 Silver Stars. The Pararescueman’s Code reads, in part “It is my duty to save lives and aid the injured. I place these duties before personal desires and comforts. These things I do that others may live.”

They have received additional honors. On December 6, 2013, Governor Cuomo awarded the Bronze Star for Valor to six members of this outfit at a ceremony at Gabreski Air National Guard Base in Westhampton for their helicopter rescue, while under fire, of four wounded soldiers in Afghanistan in 2012. The honorees were Captain Ronnie Maloney of Middle Island, Senior Master Sergeant Erik Blom of Hampton Bays, Technical Sergeant Anthony Yusup of Bloomsbury, Pennsylvania, Staff Sergeant James Dougherty of Rocky Point, Staff Sergeant Matthew Zimmer of Westhampton Beach and Staff Sergeant Christopher Petersen of Commack. (It should be noted that James Dougherty, is the son of retired PJ Chief Jim Dougherty who was part of the rescue team that rescued mariners from the Salvadore Allende mission you will read about further down in this account.)

About 400 young men every year sign up to take the training to become pararescueman. The graduating class is usually no more than 20. The rest drop out. These are the best of the best. There are currently no women in Pararescue but women are now allowed to try out for all combat positions within the Department of Defense.

By the way, here in Westhampton, the pararescuemen are the best of the best of the best. I mentioned there are three stateside Air National Guard bases for the pararescuemen. Not long ago, a timed competition was held among them to see who would win the assignment to go on alert and off into the Atlantic when the President flies across the ocean to Europe or when astronauts blast off from Cape Canaveral. Westhampton won. Although at the present time, no astronauts need their protection, it is believed there will be some back in the skies within two years. Also, one of Westhampton’s four Hercules planes goes on alert whenever the President flies anywhere on Air Force One.

The written history of the 106th Rescue Wing, in existence since 1974, is filled with stories of heroism. Members of the Wing participated in cable rescues of Turkish and American diplomats in Northern Iraq during the Gulf War. They’ve plucked downed fliers to safety from behind enemy lines in the Sudan and in Kosovo. And they are always available to help with civilian emergencies—the unit is available for non-military rescues whenever they are not on a military operation—and have taken passengers off commercial and sport fishing boats who have been injured or become ill, even far out at sea.

One of the more extraordinary operations involved the fishing trawler Shinnecock II out of Hampton Bays some years ago. The trawler, that particular day, had pulled into a net, along with some fish, a live 10-foot-long torpedo, capable of blowing everything up within three miles. The captain, instead of dropping the net with the torpedo in it onto the ocean bottom, brought it in to the Coast Guard station dock in Shinnecock. Coast Guardsmen looked it over and, unsure if it were live or not, ordered an evacuation of the immediate area. Then they ordered the captain to take his torpedo back out into the Atlantic and await further orders. From here, the PJs from Westhampton took over. They jumped out of helicopters and rappelled down, took the fishermen off the boat, set some charges and then rappelled back up for a hasty retreat. The trawler blew itself into a million pieces.

Perhaps their most extraordinary rescue involved the foundering of a 550-foot Ukrainian cargo ship 1,100 miles out in the Atlantic in the middle of 50-foot seas and a raging storm in 1994. This rescue is almost impossible to believe. Ordinarily, far out at sea the Hercules four-engine planes locate the possible survivors of a wreck, call in nearby ships and direct them to pick up the survivors. Helicopters are not involved. In this case, however, the Hercules planes could locate the Ukrainians in the floating wreckage, but there were no ships capable of coming through the storm to their aid. Helicopters with their pararescuemen and ropes were their only hope.

The range of a rescue helicopter, however, is only a few hundred miles. The choppers are built, really, to be flown for only two hours at a time. The seats are small and uncomfortable. The gas tanks limited. After four hours, the choppers get an overhaul.

What happened here was that two helicopters from Westhampton Beach went out over the Atlantic, and in an operation that involved 15 straight hours in the air and 11 mid-air refuelings, flew the full 1,100 miles into the teeth of a storm, performed the rescue, and then flew back to Westhampton. The 15 straight hours airborne on this mission is the longest such rescue attempt for rotary aircraft in American air rescue history.

Most of these extraordinary rescuemen live quiet lives with their wives and children in residential areas of eastern Long Island (such as Manorville or Hampton Bays). About a third of them work full-time at the Westhampton facility. But the remaining two thirds have full-time jobs in the community. One is a Suffolk County police officer, another is a teacher and still another is a medical student at Columbia College Medical School. All of them are “on call,” ready to leave their jobs for whatever mission awaits them at Westhampton.

Most of the information I’ve presented here comes from a book called Pararescue, about the pararescuemen and particularly about the PJs of the 106th Rescue Wing in Westhampton in their daring 15-hour rescue in the North Atlantic of the survivors of the Ukrainian freighter Salvador Allende in 1994. It is written by Michael Hirsch and is published by Avon as part of their Military History series.

“The toughest time for a PJ is right after a mission,” Hirsch writes. “Tim Malloy says it’s virtually impossible to convey, even to a spouse, what you’ve just experienced. ‘They don’t understand what its like to dive out of an airplane into the ocean at three o’clock in the morning to go to a ship and stop someone from bleeding to death. When you get home, you collapse, you’re exhausted. And the one question you can’t answer is ‘Why do you do it?’’”

I hope reading about the 106th Rescue Wing has given you a new respect for what you see in the sky over the Hamptons every few days. I know I will never think of what is going on up there in the same way again.