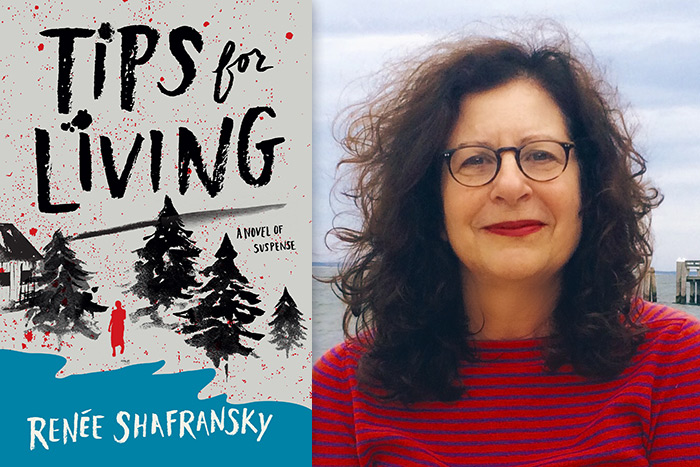 Sag Harbor resident and first-time author Renée Shafransky brings us the next novel of suspense, following in the footsteps of The Girl on the Train and Gone Girl. Shafransky’s novel, Tips for Living, follows Nora Glasser, a woman who has moved to the small town of Pequod to get away from her ex-husband and his new wife.

The relationship between Nora and famous painter Hugh Walker ended after Nora discovered that Hugh had gotten another woman, Helene, pregnant. The story begins with Helene showing up to Nora’s Pilates class. Nora now has to deal with the fact that Hugh and Helene have moved to what was her newfound sanctuary away from them. Nora begins to spiral out of control, and her anger issues are exposed just as we learn that Hugh and Helene have been murdered. What follows is Nora’s investigation into who committed the crime, though the police, and sometimes even Nora herself, believe she is the perpetrator.

Nora is self-deprecating, paranoid and unlikable. This makes the suspense of the novel fall a bit flat. Due to how impartial the reader feels toward Nora after reading through chapter after chapter of Nora questioning herself in a repetitious and trivial way, Nora cannot be trusted as a narrator, nor is she enjoyable as one. She also makes obvious observations throughout that lead the reader to believe they are not being trusted to draw their own conclusions regarding the main character’s mental state: “[…] and it dawned on me that for weeks I’d been wearing nothing but black: black jeans, black Pilates pants, black T-shirts, and black sweaters. Yet another symptom of my dark emotional state.”

Tips for Living’s other characters, however, bring wit and ground the story in reality, contrasting Nora who feels unreliable and over-dramatic. Ben, editor of The Courier, where Nora works, is charming and dependable. He and Nora develop a romantic relationship, which seems a bit far-fetched given that Nora is under suspicion for her ex-husband’s murder, but it brings a much-needed lightheartedness to the novel.

The town of Pequod serves as a character of its own. Through Nora’s descriptions as she moves through her days there, enjoying The Tea Cozy and other quaint establishments, the reader gets a real sense of what it’s like living in Pequod. The column Nora writes, “Tips for Living,” and the responses she receives from residents also give more depth to the town. The residents are mainly working class, though “summer people,” have begun to invade the small burg. This results in an us-versus-them mentality that is poignant and an interesting subplot.

Interactions with police also serve to drive the plot forward. Nora is judgmental of law enforcement, at one point observing an officer to be “a former C student” who was given “some authority” after repeating instructions for Nora to remove her outer garments when she arrives at the police station. The main detective on the case, Roche, is depicted as intimidating and out for blood. Nora clearly believes from the beginning of the investigation that the police are not only prejudicial, or as she puts it, “divorcist,” but manipulative. Nora’s interactions with the police are some of the most interesting parts of the novel because of how resistant she is to their authority, and how the police react to Nora’s traits that have been visible to the reader throughout the novel, though never addressed.

Shafransky’s novel is detailed and well written, though the main character is flawed and at times infuriating. The charm of Pequod, and character’s such as Ben, keeps Tips for Living grounded as discoveries are made about this unthinkable crime committed in a town that is otherwise, mostly, undisturbed.

Tips for Living was published by Lake Union Publishing on January 1 and it’s already getting quite a buzz. The audio book will be available on February 1.