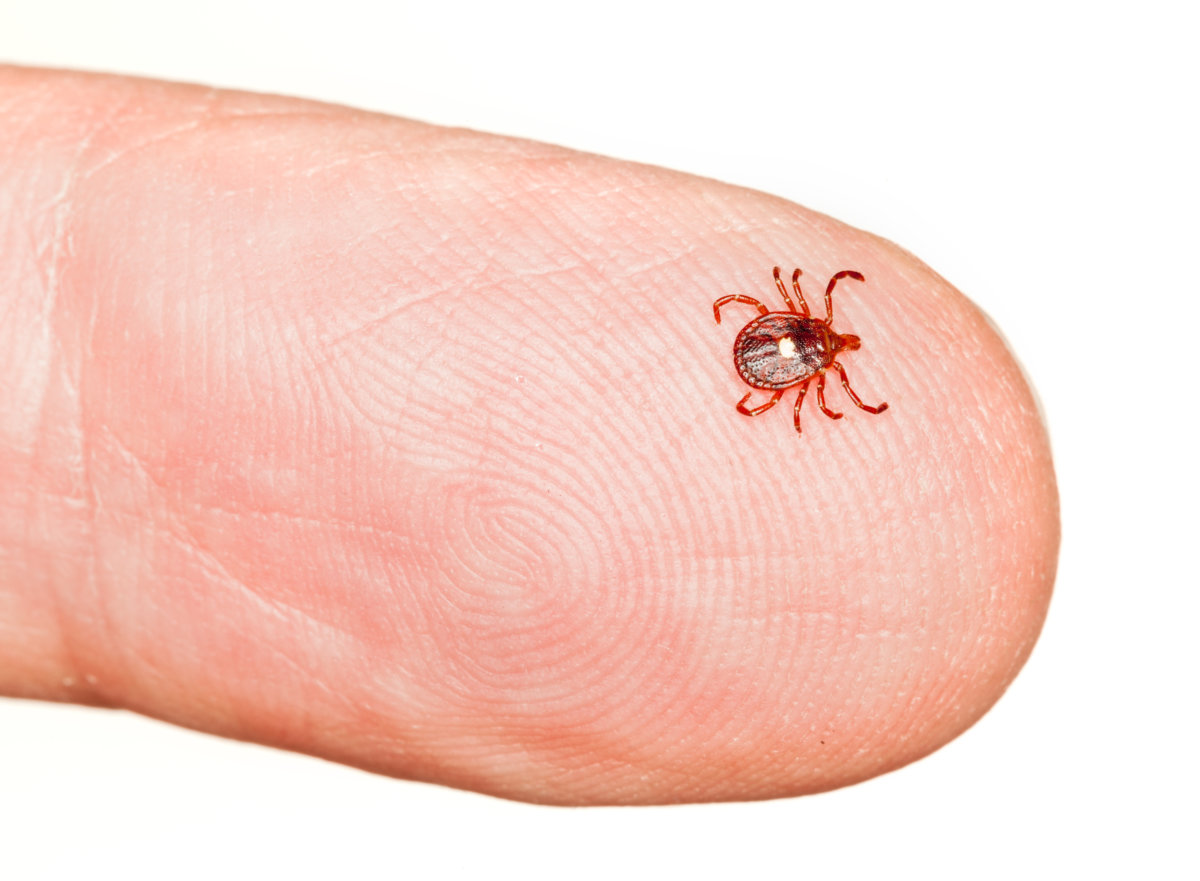 Tick safety tip: Lone star tick larvae are smaller than the spot on the back of an adult lone star tick (shown here)
Getty Images

Studies show that 20–50% of the ticks on the East End are infected with Lyme disease and 70% of all people who are diagnosed are bitten in their own yard. The month of May brings warm weather and more time spent outdoors, but it also brings ticks and awareness to the prevalent, yet preventable illness Lyme disease. According to the Centers for Disease Control and Prevention (CDC), approximately 30,000 cases of Lyme disease are reported in the United States, but an estimated 300,000 people are diagnosed annually.

Lyme disease is a worldwide infectious disease, and it has been reported in all 50 states but, thankfully, clinical trials have begun on both a Lyme vaccine developed by Pfizer and a human monoclonal antibody treatment. The human monoclonal antibody treatment being developed at the University of Massachusetts is meant to be used pre-exposure and would be administered at the beginning of the tick season.

Researchers at Yale University have also developed an mRNA vaccine which triggers an immune response at the site of a tick bite. The mRNA vaccine was built off the success of the COVID-19 mRNA and targets the tick salivary proteins, rather than the pathogen itself. The vaccine is tested in guinea pigs and causes the immune system to recognize the proteins and quickly triggers a strong immune response at the site of a bite. The redness, itching and irritation then prompts the animal to remove the tick and the strategy relies on the fact that it takes 24 hours for an attached tick to transmit the bacteria. The vaccine also provided partial protection when the ticks were not removed.

While vaccines are being tested, there’s still no still no protection against Lyme disease, but there are ways to prevent contracting the illness. Local tick and tick safety expert, and owner of East End Tick & Mosquito Control, Brian Kelly, shared a list of tick safety tips residents should consider when venturing outdoors to limit the risk of contracting a tick-related illness during the warmer months.

2. Tick encounters are happening just about everywhere! Always use a repellent when going outdoors and get yourself and family into the habit of checking yourself very carefully afterwards. Pro tip: Have someone else check your back and areas you can’t see.

3. Put a fence around your yard to help keep deer and other animals out of your yard.

4. Keep your pets confined to your landscaped lawn and never allow them to enter the woods. Use a tick repellent recommended by your veterinarian, and if you travel with your pet, make sure you check them VERY carefully afterwards.

5. Teach your kids about the dangers of going into the woods and uncharted territory. Get them into the routine of checking themselves after being outdoors and ALWAYS check them yourselves.

6. The Tick-Borne Disease Resource Center at Southampton Hospital offers free tick removal kits. Pick one up, learn how to properly remove a tick. Keep it handy at all times.

7. Keep your grass cut short and don’t over-water your plants and shrubs! Ticks are attracted to long grass and cool damp areas.

8. Ivy and other sorts of ground cover are tick hot spots, avoid them at all times.

9. As part of your spring yard clean-up, eliminate tick habitat by raking and removing leaves that have blown into your yard edges and under shady vegetation.

10. Perform tick checks twice a day, once at night and then again the following morning.

11. Tuck your pants into your socks and spray both your skin and clothing with repellent before going outdoors.

12. When coming in from the outdoors, put your clothes in the dryer and on a high heat for at least 15 minutes.

Tick Safety: Prevention Is Better Than a Cure

Kelly always tells his customers that “prevention is better than a cure” and takes a proactive approach to tick safety. “The risk of contracting a tick-borne illness, such as Lyme disease becomes increasingly worse, and there are new diseases emerging. We recently learned of a new virus confirmed in Suffolk County, the Heartland tick virus, which has claimed the lives of a growing number of people, primarily in the Midwest. While vaccines are being tested, there’s no cure, and with many mild winters, ticks are becoming progressively worse year after year.  Follow these steps and have your yard sprayed  NOW to help prevent ticks from entering your property.”

If you believe you were bitten by a tick, keep an eye out for early stages of Lyme disease. Early stages of Lyme disease can include a bullseye-like rash for up to 60% of Lyme cases but the remainder show no rash at all! Other symptoms can include chills, fever, fatigue, headache, swollen lymph nodes, muscle and join pain. If left untreated, Lyme can lead to serious medical complications such as arthritis, heart and nervous disorders, Bell’s Palsy, miscarriages, stillborn births, meningitis, numbness, pain and neurological damage. If you experience any of these symptoms after finding a tick, contact a physician immediately.