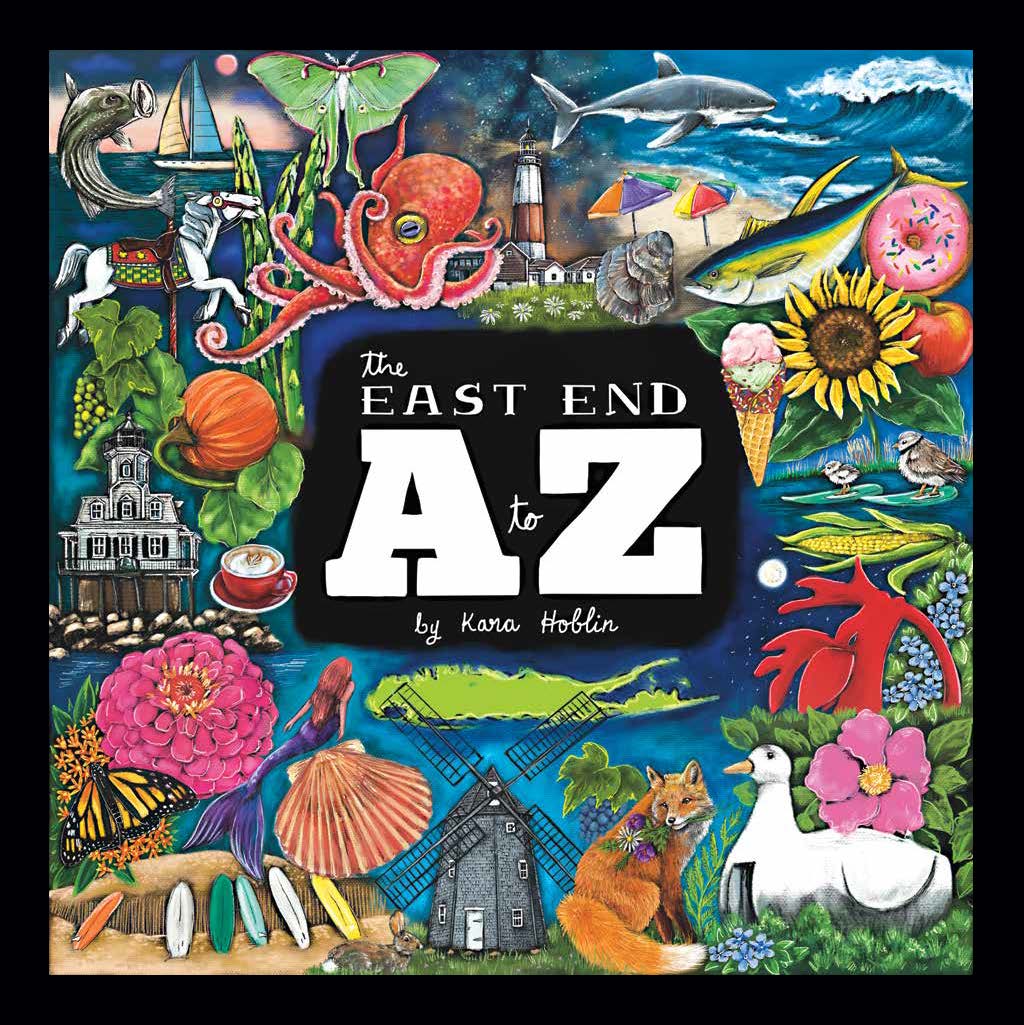 “The East End A to Z” by Kara Hoblin

“Creepy caterpillars crawled cautiously through the corn maze,” Greenport artist Kara Hoblin writes with heavy alliteration in her new illustrated alphabet book, The East End A to Z, which also functions as a wonderful “I Spy” activity for children and parents who read it to them.

Just released by East End Press on Tuesday, October 4, the book is alive with Hoblin’s lovely illustrations depicting individual letters of the alphabet filled with imagery of East End flora, wildlife, landmarks, businesses, homes and much more. Each artistic letter is opposite a page with one of Hoblin’s whimsical, alliterative sentences and a list of things to find within the picture.

For the two-page “C” spread with her “creepy caterpillar” sentence, for example, the artist lists clam, chicken, corn on the cob, crocus, corn maze, Cutchogue Diner and crab, among other items that can be discovered in the beautifully rendered corresponding artwork.

While her career was already moving along nicely — with multiple solo and group exhibitions, and work as a muralist and live chalk artist all across Long Island and beyond — Hoblin became even more well-known to the East End community and people in nearly every country around the world when, during the height of the pandemic in April 2020, she created a colorful chalk drawing on her driveway in honor of essential workers and posted it to social media.

The moving tribute, which showed doctors and nurses in a heart made of flowers with a “Thank You” banner across the front, quickly went viral, making headlines through various news outlets, including Dan’s Papers and national websites like upliftingpandemicstories.com.

Hoblin’s image grabbed the attention of thousands who admired and shared its bright, positive sentiment during a very dark time. And this widespread visibility was directly responsible for the book that is now hitting shelves more than two years later. At the time, East End Press publisher Pauline Neuwirth says she saw the essential workers tribute and was “captivated.”

She contacted Hoblin and they worked together to create The East End A to Z, which feels destined to be a classic that parents and their kids will read over and over, always finding something new in the artist’s intricate illustrations. As Hoblin explains in the “how to use this book” page: “Enjoy the illustrations. Read along with your little ones. Try to find all the things. Repeat, again and again. Feel the love. Spread the compassion. Explore the East End.”

Kara Hoblin on ‘The East End A to Z’

“When Pauline reached out, it felt like the perfect fit, because she really handles distribution and everything aside from me being somewhere and signing a book, and drawing and writing everything,” Hoblin says, noting that Neuwirth provided helpful information about the South Fork since she knows much less about that half of the East End.

She says the publisher was very accommodating and took time to walk her through all aspects of the book’s creation. “I also was very needy. I need to see the paper, I need to see everything before it gets printed, because for me it’s an extension of my artwork,” Hoblin continues.

“This book took almost a year to make. It started as chalk but then I transitioned to drawing them digitally,” Hoblin recalls. “I really wanted to preserve the look of my work. I didn’t want it to look digital … so it was a challenge,” she continues, pointing out that The East End A to Z started as picture book, but after she finished all the letter illustrations, she knew it needed more.

Hoblin then wrote the little, single-sentence stories before coming up with the inspired I-Spy idea, which she realized would make it more fun for kids and parents to read together.

“If I were a mom, I’d love to spend time with my kids reading to them. They can find the things and feel empowered,” Hoblin adds, noting that filling the book with recognizable things from the Hamptons and North Fork also makes it more personal and relatable for readers.

“This is where we live. This is our home. These are things they can then connect with driving by, or remember. That’s what I was thinking. Learning about the place where you live in a fun way,” she says. “It’s inclusive for every age, basically. I didn’t want it to just sit on a coffee table and look pretty, which it can do. But I hope parents and kids also want to pick it up.”

Beyond a few businesses, like the Cutchogue Diner, Hoblin tried to approach her subjects without using specific names. Instead, she considers many of the drawings as “Easter eggs,” which will be recognizable for those who know the area.

For example, the artist says the red coffee cup and saucer on her cover is an “iconic” part of Aldo’s coffee shop in Greenport, but adds, “I didn’t write ‘Aldo’s’ because I didn’t want to favor anybody, and I couldn’t make a book with everybody because there’s just too many people.”

She also put her dog Lily on the “D” page and drew blue, Cookie Monster-flavored ice cream, famously from Magic Fountain in Mattituck, on the “I” page, and a faded representation of the Lucharitos wrapper on the quesadilla in her “Q” drawing. The tractor under “T” is a faded pink color, like the unforgettable farming vehicle parked at Bayview Market & Farms in Riverhead.

Hoblin is launching The East End A to Z with a book signing at First and South in Greenport on Tuesday, October 4 and she will do more signings at a future date.

Visit your local book shop or eastendatoz.com to get a copy of the book. Follow Kara Hoblin on Instagram @karabellaa for the most up-to-date info on her art, events and appearances, or check out karahoblin.com to see more work.