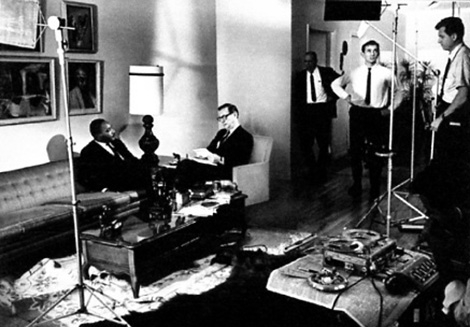 North Haven resident, George Silano has been booked to present his exclusive and rare film about Martin Luther King, Jr. at Southern Oregon University on April 11. Mr. Silano directed and filmed this intimate portrait inside Dr. King‘s home in Atlanta, during December, 1965, where no other filmmaker had ever been allowed. Mr. Silano presented his film at the Parrish Art Museum on February 15.Silano (the only living member of the original crew) was curious about the film’s whereabouts nearly five decades after shooting it, so he tracked it down to the University of Georgia, where producer Arnold Michaelis‘ large media archive ended up after he died in 1997.

While the interview with King took place over the course of a week, the footage was edited down to 60 minutes and titled Rev. Martin Luther King Jr.: A Personal Portrait. It includes King speaking about the Civil Rights Movement and the Vietnam War, and a conversation with his wife Coretta. It had never been screened publicly until it was premiered January 28, 2013, at the Rogers Memorial Library in Southampton, followed by the screening at the Parrish Art Museum.

Watch the video below to see Silano discuss the film with interviewer Brenda Simmons on her show Voices of Wisdom.