Jennifer Bartlett: History of The Universe at the Parrish Art Museum

By Stephanie de Troy
comments
Posted on May 6, 2014 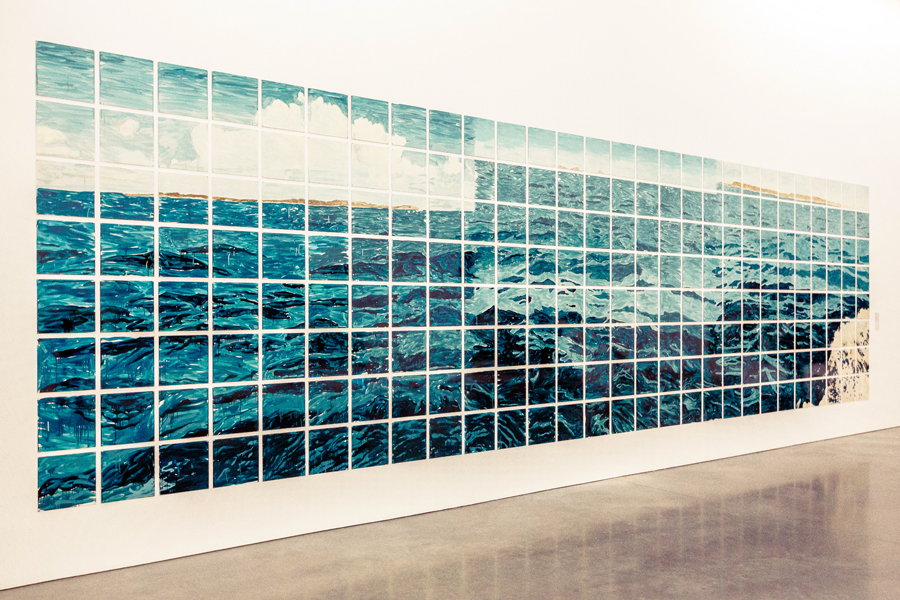 “The grid is everywhere,” explains Klaus Ottmann of Jennifer Bartlett’s work, as he stands in the hallway of the Parrish Art Museum among a crowd of eager listeners during his talk and tour on April 27. Ottmann, currently the Director of the Center for the Study of Modern Art and Curator at Large at The Phillips Collection in Washington, D.C., was the Robert Lehman Curator for the Parrish Art Museum from 2008–2010 and is the curator of the current exhibition, Jennifer Bartlett: History of The Universe, Works 1970-2011.

“The subject of her early work, the grid, gives a sense of place in her later work, embodied in the house,” Ottmann explains, as Parrish Executive Director Terrie Sultan points out the house-like structure of the Museum’s hallway, where exposed wood beams meet at a point—the triangle atop a quadrilateral, forming the iconic house shape. For Bartlett, place became a major theme in her work, while the house became a motif that represented the universe, perfect in all of its imperfections. “It simplifies human existence while being very abstract,” Ottmann remarks.

Bartlett was born in Long Beach, California in 1941. She graduated from Mills College in Oakland. She received an MFA from Yale School of Art and Architecture in 1965, and by 1968 had settled in SoHo, at a time when Minimalism and Conceptualism were gaining recognition. Influenced by both, Bartlett’s grid, which is indeed present throughout the exhibition, demonstrates self-imposed structure. From this rule-based construction, she allows herself an expressionist freedom, and freedom to incorporate both elements of representation and abstraction in such a way that is constrained and yet unquestionably felt. Perhaps this push and pull, a tension between order and chaos, is what makes her work so successful.

Large-scale works in the first room of the exhibition seem to change mood with the shifting light, as clouds pass above the skylights. Bartlett’s diptych “Rose” (2010-11) embodies beauty and gravity, with a somber undertone that comes and goes.

The exhibition’s title, History of the Universe is also the title of Bartlett’s intimate autobiographical novel, published in 1985. Likewise, all the paintings on view share a sense of autobiography. “Five P.M.” (1991-92), on loan from the Metropolitan Museum of Art, is part of a series of 24 paintings made during a two-year period — each a 7-foot square, and each including two grid elements. Here, the overlaying grid of 6 x 10 (which makes up 60 minutes in an hour) and the patterned grids within the lily pads create a flatness, while the overhead perspective looks down into a koi pond. The fish seem to swim over and under the grid, as if it were part of the pond itself. There is a clock in the lower righthand corner revealing the time.

“Something is usually wrong,” Ottmann says of both life itself and of elements in Bartlett’s work, noting, “The perfect shape of the house is distorted by what’s happening inside.” This quality is demonstrated quite literally in “Double House” (1987), an example of Bartlett’s innovative mixing of painting—which brushes up with photo-realism—and sculpture. Her repeated use of the diptych could be a metaphor for the binary ways of looking at memories and events.

Bartlett’s trademark steel plates come into play with “Atlantic Ocean” (1984), a massive work measuring 103 x 363 inches, featuring enamel over silkscreen grid on baked enamel steel plates. Similar to “Rhapsody”—the 1976 work that was first shown at Paula Cooper Gallery in New York and has since graced the atrium of the Museum of Modern Art in both 2006 and 2011—the white walls behind the steel plates become the grid. What Roberta Smith wrote in her 2011 review of “Rhapsody” for The New York Times can be applied to “Atlantic Ocean” as well: “The first impression overwhelms, yet the work unfolds intimately, plate by plate, in real time, with novelistic, cinematic and, as its title implies, musical overtones.”

Jennifer Bartlett: History of The Universe, Works 1970-2011, curated by Klaus Ottmann and organized by the Parrish Art Museum, first traveled to the Pennsylvania Academy of Fine Arts in 2013. It is now on view at the Parrish Art Museum in Water Mill (279 Montauk Highway) through July 13. Visit parrishart.org or call 631-283-2118 for more information.