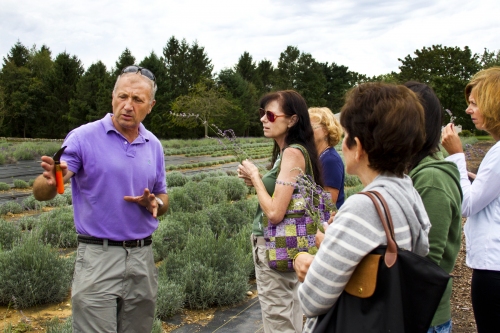 Serge Rozenbaum, owner of Lavender by the Bay in East Marion, treats guests to a guided tour of one of the largest lavender farms in the country, at the 6th annual North Fork Foodie Tour in 2012. Photo credit: Nicholas Chowske

The North Fork Foodie Tour is back on Sunday, September 20, for its ninth edition, this year featuring 18 stops plus lectures at Peconic Land Trust’s Charnews Farm in Southold. The self-guided tour highlighting artisan foodmakers, vintners and sustainable agriculture offers locavores an exclusive behind-the-scenes look at the industries at the heart of the North Fork.

Event co-chair Kay Freeman explains that the North Fork Foodie Tour was established eight years ago to showcase the amazing agricultural opportunities on the North Fork and to bring visitors to the farms and vineyards to see what they produce. The tour is also a fundraiser for the North Fork Reform Synagogue, based in Cutchogue.

About 500 people are expected to come out for the tour this year, many of whom have come back every year since the event’s inception, according to Freeman. Many of the venues have also participated from the beginning. “they’re delighted to be part of thus year after year,” Freeman says.

Lectures will begin every hour on the half hour at Charnews Farm.

At 10:30 a.m., chef Deborah Pittorino of Cuvee Seafood & Grille demonstrates cooking with home-grown herbs. Peter Clarke of Clarke’s Garden in Greenport presents on growing herbs and their uses at 11:30 a.m. “The Secrets of Sourdough and Its Benefits for Taste and Health” with James Beard Award-winning chef and author Peter Berley begins at 12:30 p.m. At 1:30 p.m.,

Dan Heston of Peconic Land Trust talks about nurturing new young farms to preserve agriculture. Chef John Ross, the author of The Food & Wine of the North Fork, will hold a cooking demonstration and offers tastes at 2:30 p.m.

Foodie Tour headquarters, with tour maps available, is located at Peconic Land Trust’s Agricultural Learning Center at Charnews Farm, 3005 Youngs Avenue in Southold, between Routes 25 and 48, however maps and wristbands will be available at all of the stops.