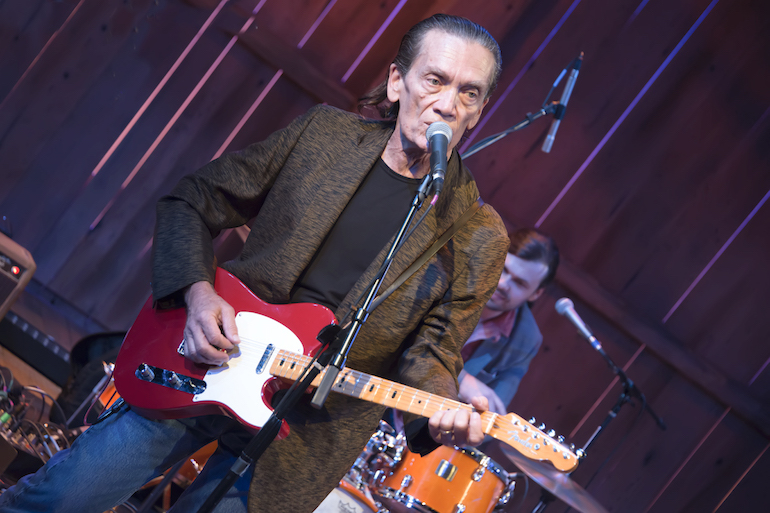 Blues/rock guitarist G.E. Smith is the kind of hard-working musician they don’t seem to make anymore. The former SNL bandleader and sideman to Roger Waters, Hall & Oates, Bob Dylan, Mick Jagger and David Bowie has performed and recorded with an incredibly long list of influential artists. He even wrote the Wayne’s World theme song with Mike Myers. G.E. lives in Amagansett with his wife Taylor Barton and daughter Josie.

G.E. Smith: I first came out in 1979 to visit friends in Amagansett, and by 1981 I had a house in Amagansett. We’ve been full time here for the last five or six years. Our daughter, who’s 16, didn’t want to be in the city anymore, as it’s so noisy and dirty. We’re really happy. I love it here, even in the wintertime when the sky’s 10 feet over your head, even in February. My wife needs to take some time out in Florida then though!

BTH: What’s your favorite place in the Hamptons to take in music?

GES: Stephen Talkhouse—I must have played there 150 times with different people and I’ve seen a lot of acts there.

Guild Hall, where we just finished our Guitar Masters series, is really good sounding. My wife, Taylor Barton, produced it. It was a big success, but we’ll be excited to do more next year.

My Portraits series is also at Guild Hall. I’ll have someone who plays music, but isn’t necessarily a musician, someone like Ethan Hawke or Dan Rizzie. We talk and play, very informally, as if we’re in someone’s living room with our instruments. We also get Hamptons guys like Roger Waters and Billy Squier, visiting people like Sarah Jarosz, who’s just fantastic by the way, or Kevin Bacon and the Bacon Brothers, and we’ll do an old Motown song. The audience gets to see the people do the song they know.

This summer, we have Sophie B. Hawkins and Trevor Hall, and later on the Avett Brothers, who are huge. Scott is a painter as well, and got to know Eric Fischl through the painting world. He came to Southampton and we got to be friendly, but it took a couple years for him to finally have time to be in the Portraits series.

GES: A doctor. I was very interested in medicine and the human body. In college, I weaseled my way into a cadaver course and dissected some guys.

BTH: Who’s the guitarist you most admire?

BTH: What are some of your career highlights?

GES: I got to play with a lot of the people I really admire. And of course, when I was on Saturday Night Live, I got to meet everyone—everyone came through there. Just continuing to play the guitar, which I became obsessed with when I was four. I’m 66 and I play every day. Musicians don’t retire! The object is to get really old and die on stage.

BTH: What are you most proud of?

GES: My daughter Josie, who’s 16. She’s just come back from two weeks in Scandinavia. Nothing else I’ve ever done compares to her.