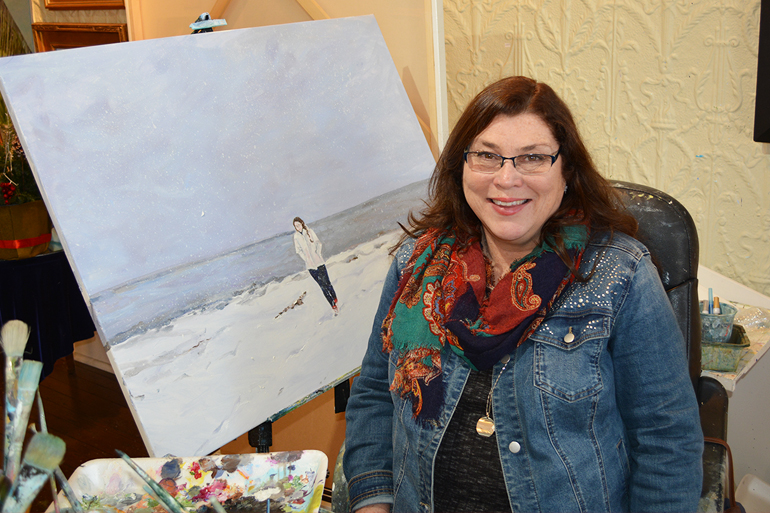 The East End has an abundance of beauty: from the lighthouses along expansive seascapes to the vineyards sprinkled throughout lush landscapes and, of course, to the works of talented local artists. One such artist is Isabelle Haran-Leonardi, winner of a dozen Dan’s Best of the Best (BOTB) awards between her open studio, Nova Constellatio Gallery (2018 Platinum North Fork Art Gallery), and herself (2018 Platinum East End Artist).

A longtime resident of Laurel, Haran-Leonardi painted and sold her works from a home studio for two decades, but a lack of space needed for large paintings and isolation from buyers led her to seek a new workspace in 2012. She began her search in Greenport, the cultured hamlet she fell in love with during a stint as an artist-in-residence at the Stirling Historical Society’s Berger House. “It was such a nice experience,” she recalls. “I really liked, very much loved Greenport. I loved the whole vibe of it!”

When Haran-Leonardi first moved her studio to the seaside village, Greenport had an abundance of galleries on Main and Front streets, and the art community welcomed her when she chose a spot on Main Street. She admits there was a steep learning curve, but between her strong client base and her husband Bill Leonardi’s accounting prowess, the gallery has seen great success.

Often asked where the name Nova Constellatio Gallery comes from, Haran-Leonardi is used to explaining that the term is synonymous with the first coins ever struck by the United States in 1783. “When the Nova Constellatio coin was made, it was the idea that in the New World—in the new country—the finer things in life should be available to everybody,” she remarks. She and her husband first used the moniker for a fine art, coins and collectibles online store, and, since they already had the name incorporated, decided to use it for her first gallery.

Many of Haran-Leonardi’s works draw inspiration from the expansive sky, powerful waters and quality of light found on the East End; in addition to these muses, she’s recently been drawn to local wildlife, especially deer. “Everybody complains about the deer. The deer are everywhere! But I just find them really magical,” she says.

Fantasy has long slipped into Haran-Leonardi’s work as well, as she’s been fascinated with mermaids since she was a young girl. “The very first book I remember buying for myself, when I was in first grade and they had these little book fairs, was The Little Mermaid by Hans Christian Andersen,” she recalls. “I never really liked the story; I thought it was terrible what happened to the mermaid, but there was a picture on the cover that I was absolutely in love with. I would practice as I was little; I would draw all these mermaids…For me, it’s like a symbol of freedom and this idea of being in two worlds at once.”

The mermaids found in Haran-Leonardi’s art don’t exist entirely in the fantasy world though; each one is modeled after a real person. “There was one that I did for the Maritime Festival a few years ago, and it was of two little girls who lived upstairs who were, at the time, in love with Beyoncé,” she remembers. “They would come down here, and they would twirl around, twirl around, twirl around and sing Beyoncé songs…They had a lot of opinions on how they should look [as mermaids], and they needed Beyoncé hair. So in the painting, it’s them swirling, but they have this crazy hair that fills up the corners.”

After a knee injury made plein air painting impossible for several years, Haran-Leonardi’s process of recreating these landmarks gained a technological edge, beginning with a photo, then many photos. “It’s funny because sometimes I’ll think I’ve only been planning a painting for a little while, and I’ll go back and realize I’ve been taking reference pictures of it for like 10 years,” she says. Once enough photos have been taken, she imports them onto her computer and assembles the desired composition, moving and scaling images as needed. The entire process can take up to a year, but once it’s done, she paints the printed composition quickly. “Even detailed paintings are going to take me tops three weeks,” she says.

For her seascapes, Haran-Leonardi uses a wildly different approach that only takes a week. Each one is a piece of music loosely transposed onto the canvas. “I’ll know pretty much what I want, and the music will tell me what to do,” she explains. Her painting “Splash” is a transliteration of the Miles Davis rendition of “Summertime,” originally from the opera Porgy and Bess.

Everyday Haran-Leonardi paints small works, such as the bird paintings in the front of her gallery, and brainstorms ideas for her next big painting. She doesn’t make a habit of displaying the artwork of others, so this practice helps keep Nova Constellatio Gallery stocked with beautiful pieces for visitors to peruse and purchase.

However, there are a select few pieces in the gallery that are too sentimental to sell. Above her easel hangs a gorgeous painting of a house on wheels overlooking a field of cosmos that she and her oldest son, Nicholas, used to marvel at while waiting for his bus to arrive. The house was parked by Bayview Farms in Aquebogue, and the family that owned it would sometimes move it to a new location by way of a little red truck. Nicholas, who is impacted by autism, found it difficult to comprehend why anyone would want to live in such a constant state of change, but the flowers below worked to distract him from that distressing concept.

Both admirers of Gregor Mendel, the father of genetics, Haran-Leonardi and Nicholas loved to observe the colors of the cosmos. “It’s just one of those things they teach you in high school. If you have this kind of flower: 25% is white, 50% is pink and 25% is red,” she explained. “So to keep Nicholas entertained, ’cause he’d get upset that the bus wasn’t on time, he would count them, and, low and behold, it was true.” The full story is lovingly written along the edges of “Gregor Mendel and the House on Wheels,” hidden behind the frame.

Haran-Leonardi has been featured on the cover of Dan’s Papers twice, first in 2015 and then in 2016, and she still remembers the impact that first cover had on her. “I was so happy! I’ve been looking at them since I don’t even remember when…so it was a big thrill to me,” she says smiling, adding, “People on the North Fork knew [about the gallery], but it brought more of a South Fork clientele to me.”