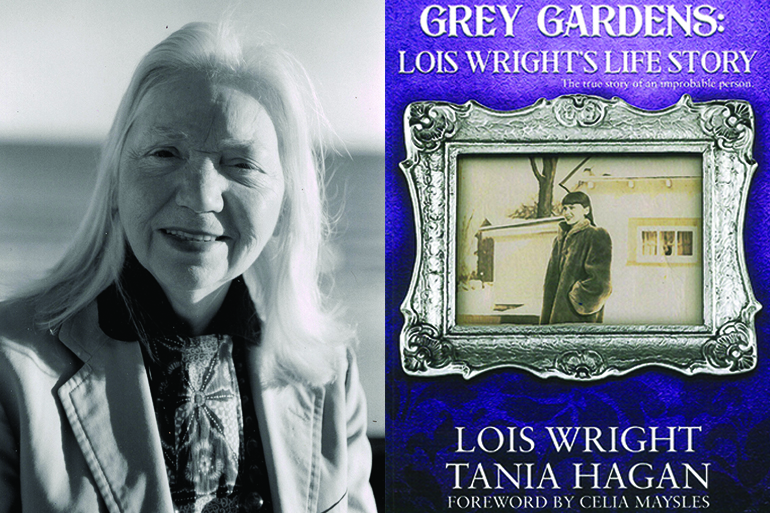 At 91 years old, East Hampton television personality, author and artist Lois Erdmann Wright is one of the last living people with a direct connection to Albert and David Maysles’ seminal 1975 documentary Grey Gardens and the eccentric residents of the infamous home at its center. This fact, along with her appearances in the film and the Maysles’ 2006 sequel, The Beales of Grey Gardens, as well as her 1978 book My Life at Grey Gardens: 13 Months and Beyond have raised Wright’s profile among Grey Gardens super fans. Now those fans can enjoy one more addition to the growing lexicon of related books as told by someone who was actually there.

Written in collaboration with Chicago-based author Tania Hagan, Wright’s new biography, The Ghost of Grey Gardens: Lois Wright’s Life Story diverts from the usual fare about Edie “Little Edie” Bouvier Beale and her mother Edith “Big Edie” Ewing Bouvier Beale and their crumbling estate. Instead, the book delves deeper into Wright’s fascinating life before, during and after Grey Gardens, as told through Hagan, an admirer and new friend.

Hagan’s account came together following hours of phone conversations with Wright, interviews with people in her life and full access to 20 years of her subject’s logbooks, letters and papers. The effusive author will speak about the book and sign copies with Wright at BookHampton in East Hampton (41 Main Street) next Friday, November 1 at 4 p.m.

What is it about Grey Gardens, the Beales and Lois that made you feel, as you wrote, “these are my people?”
That’s sort of the million-dollar question. They reminded me of my grandmother and my aunt and different people I’ve known throughout my life, and it was just so touching that the way they were living was horrific but they didn’t notice it. It was OK for them, and it was so interesting to me. I joined some social media groups related to Grey Gardens and one thing led to another, and I called Lois one day and said, “Lois, you’ve never had a biography about your whole life, would you like to do this with me?” And she jumped on it.

She had only written one book, which was taken directly from her logbook from the year she lived with the Beales, but no one had ever written her entire life story, and it’s been fascinating. I love Lois. I called her every other day and we still have a wonderful friendship. This is her story.

Tell me about when you finally got to meet Lois in-person.
It was wonderful, and Lois told me even more stories than we had in the book. She’s a lot of fun and she’s one of the most brilliant women I’ve ever met. She has an answer to everything. There’s nothing that Lois doesn’t have an opinion on.

Your interest in Lois started with your love of Grey Gardens and a desire to connect with it in some real way, as is the case with many fans who, as Celia Maysles put it in your book, “court” Lois. How did that change after getting to know her?

It became something more almost immediately. Lois and I would talk for hours and hours and hours, even if we weren’t talking about the book. For me it was a labor of love the entire time. Lois and I had to agree on every single word in the book, and then we sent it on to her niece [Siri Zwemke] and she had to agree with every word. It was a beautiful process the whole way.

How did Lois’s first book play into what you wrote?
That particular book was taken directly from her logbooks. However, when she was writing it she wanted the Beales to shine. She wanted it to be their story, so she excluded everything she was doing personally outside of Grey Gardens. She took out the fact that she was a realtor, the fact that she had a little office downtown. She took out a lot of the things she was going through. We intentionally touched very lightly on the time she had covered in her first book. She’ll read it and reread it and all that good stuff. She’s very happy with it.