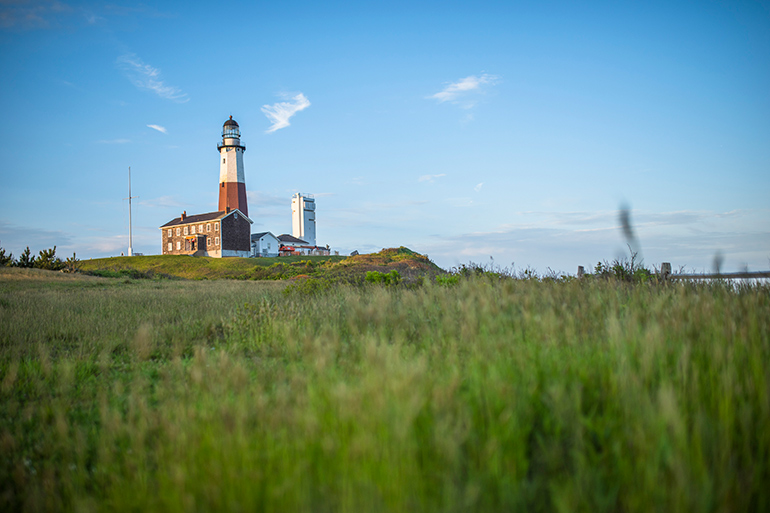 When you think about the main attractions in the Hamptons, what likely comes to mind are the Montauk Lighthouse and the 12 English windmills that are found in East Hampton and Southampton Towns. But did you know that if you came here in 1870, when the first summer people arrived, there were four lighthouses? In fact, the existence of the four lighthouses actually caused the worst shipwreck to ever take place in the Hamptons, the wreck of the three-masted schooner John Milton.

The first was, of course, Montauk Light, standing 110 feet high on an 85-foot cliff at the very end of Long Island. It is the one we all know and take our children to see. Commissioned by George Washington in 1792, just a decade after the final surrender of the British at Yorktown, it has had a long and successful career in keeping watercraft safely clear of the Point. There have been fishing boats and other small craft that have come ashore in storms with their passengers and crew glad to see the lighthouse keeper and his or her mates help them to safety.

After Montauk, two lighthouses were built in the Hamptons to guide mariners through Gardiners Bay and Peconic Bay. The first was the Cedar Point Lighthouse, constructed in 1868 on a small dry island at the end of a curving, often-underwater peninsula leading out from the small community of Cedar Point. A Foursquare building in the Italianate style, it was built of granite in a design that made it look like a three-story home, which it was for the keeper and his family and helpers. The home was 40 feet high and on its roof was a 14-foot-tall glass cage holding a sixth-order Fresnel lens that could send a flashing green light visible from five miles off.

The third lighthouse was built on a 14-acre peninsula that jutted out from Gardiners Island, the oldest and largest private island in America, and still owned by the Gardiner family to this day. The lighthouse went into service in 1855 after testimony given by local people to the National Lighthouse Board—there was a Lighthouse Board—on the need for such a lighthouse.

In researching for this article, I came across the testimony of local East Hampton resident Lewis Edwards at the hearings:

Question: So you Mr. Edwards have lived on Gardiners Island for more than 15 years?

Question: And during your time, can you describe if there were any shipwrecks that happened on the island?

Edwards remembers 13, gives the ship names where he remembers them, how many people were rescued and so forth and so on.

After Gardiners Island, the fourth lighthouse in the Hamptons, the Shinnecock Light, was built high on the mainland shore of Hampton Bays because nobody trusted that the barrier island of Dune Road on the ocean would be sturdy and safe enough for a lighthouse in severe weather.

At 168 feet, it was the 10th tallest lighthouse in the world. And it was built and put into operation because the distance between the Montauk Lighthouse and the next lighthouse going west at Fire Island was 67 miles, and the Lighthouse Board felt this distance was too great to go unprotected so, somewhere in between a lighthouse was needed to cast a light for ships crossing the ocean between New York City and Europe.

This lighthouse became operational on January 1, 1858. Forty-nine days later came the crash of the four-masted schooner John Milton into the cliffs and rocks five miles to the west of the Montauk Light, killing all 33 people on board.

By this time, all four lighthouses in the Hamptons were shining their lights. The lighthouses at Cedar Point and Gardiners Island played no part in this disaster because their lights were not visible from the ocean. But the new Shinnecock Light, some believe, confused the captain of the John Milton, Ephriam Harding. He had been sailing up the Atlantic coast bound for New York City with a load of guano on board, which he had picked up in Peru after going around the horn from San Francisco. Approaching Long Island from the south, however, he ran into a vicious winter snowstorm, which he decided would make a run to the west to the docks at New York difficult, and so instead turned his ship east to round Montauk and approach the city through Long Island Sound.

Traveling in a strong wind under full sail, he passed the Fire Island Lighthouse on his port side and soon thereafter saw what he thought was the Montauk Light. In fact, it was the brand new Shinnecock Light and, because news traveled slow back then, he did not know it had been built. Nevertheless, he’d give this “Montauk Light” a wide berth, so went way out to sea to curve around it, and simply did not see the rocks and cliff at Ditch Plains until it was too late.

The John Milton crashed into the rocks and instantly broke in two spilling cargo everywhere and killing all on board, either from the shock of it, the freezing waters they fell into or what they got hit by when the ship disintegrated.

The Montauk Lighthouse keeper, his wife and their few assistants knew nothing of the wreck. But in the morning light of February 20, a member of the Stratton family, the innkeeper at the Third House Inn, saw the shipwreck while on horseback cantering along the beach. Bodies frozen solid in this winter storm had washed ashore, some alone, others in ghastly embrace with shipmates. There were 22 in all, including a boy, the son of the captain; 11 others were never found. The good people of East Hampton collected the bodies and held the grim funeral for those who died, lining their coffins up on the town green. After Christian sermons, they buried them in a common grave in the graveyard there. The ship’s bell was put up in the belfry of the Presbyterian church.

So there were four lighthouses, and today just one. What happened to the other three?

A great nor’easter, called the Great Blizzard of 1888, caused a break in the Gardiners Island peninsula that never healed. The 14-acre peninsula was now a 12-acre island, and as the waters continued to rise and the island was shrinking at the rate of 10 feet a year, it was decided in 1893 to abandon the Gardiners Island Lighthouse. Waters soon flooded it. Five years later, the U.S. government, edging toward war with Spain, decided to mount cannons on the ruined lighthouse walls, call it Fort Tyler and turn it into a military base to fend off the Spanish fleet if they ever tried to invade Long Island, which they never did. In the 1920s, after the First World War, the ruined fort/lighthouse was used for target practice by U.S. Army aircraft. Mostly underwater rubble today, it is called “the Ruins” on charts, and mariners are asked to stay away to avoid what might be unexploded ordinance.

Beginning around 1925, with telephone, telegraph and wireless in common use for navigation, the Coast Guard decided to decommission many lighthouses around the country and replace them with tall steel towers with lights run remotely atop them. It was a cost-cutting measure.

The Cedar Island Light was decommissioned and then abandoned in 1934. The peninsula, unlike the one at Gardiners Island, rose higher out of the water and became a road. It became a private home for a while, but soon was abandoned again to become a ruin, sometimes with graffiti on it. In recent years, however, it has received a historic landmark designation, and the county now owns it and hopes to make it into a publicly owned bed and breakfast. No steel tower was ever built there.

In Hampton Bays, however, the Shinnecock Light was abandoned also in 1934, and a 75-foot tower with the blinking light on top was built nearby to replace it. It was scheduled for demolition because at its great height it was felt it would be a hazard if it ever fell. Then came the Hurricane of 1938 and the Shinnecock Lighthouse stood tall, but the great steel tower came crashing down.

Nevertheless, with a new steel tower put up, the Coast Guard did decide, over protests, to take the lighthouse down anyway. It happened in 1948. Huge wooden beams were brought in and slid through holes punched 10 feet up in the brick to make a wooden “floor” at that level. Then enormous wooden posts were placed inside of the lighthouse to hold up the wooden floor. With that all in place, all the brickwork below the wooden floor on one side was removed and the wooden structure set on fire, and when it burned up, the lighthouse collapsed on the side where there were neither bricks nor wood to support it.

A photo of that lighthouse, its bottom now tipped and its upper level falling away further in a puff of white smoke, shows what happened during the moment the lighthouse fell.

You can contact the Montauk Lighthouse at 631-668-2544 or visit montauklighthouse.com.