This photo suggests lions may still roam the Hamptons

The king of Hamptons hoaxes, Dan Rattiner began writing his tall tales in Dan’s Papers long before the likes of The Onion or other satirical publications were fooling readers around the world. His long tradition of satirical stories, often touching on deeper truths, or just good for a laugh, continues even to this day, though less frequently. Standouts that shocked and amazed, and bamboozled long before DansPapers.com could make them go viral, included stories such as local police asking residents for meat donations to feed a killer shark in order to stop it from feeding on beachgoers (which was picked up by Sports Illustrated and the Wall Street Journal, among other publications); Howard Hughes taking up residence in the Montauk office tower; a billionaire accruing more than $2 million in local parking tickets; and a story about the Hamptons sinking into the sea due to increased tourism.

Over the years, Dan’s writers have followed our founder’s lead, adding even more wild tales to the paper’s legacy of hoaxes and satire. In celebration of April Fools’ Day, we take a look back at some of the most believed, and beloved (for the good sports among us), stories on DansPapers.com — including one that actually came true! In December of 2013, with the community in an uproar over a proposed deer cull, Dan told the tale of South African billionaire Hans Van der Klerk, who released 26 lions into the Hamptons wild as a way to take care of the deer overpopulation problem. The story became a viral sensation and caused a bit of panic for people fearing they might run into one of these ferocious beasts. A string of related stories followed, including a map of lion release locations, video evidence and more. The Dan’s Papers Police Blotter was home to all kinds of strange and satirical stories, and colorful characters over the years, but none were as beloved as recurring Shelter Island offender Old Man McGumbus. The 100-something WWII veteran with a long list of jobs became internet famous in August of 2012 when David Rattiner’s blotter entry about him became the top story on Reddit, one of the most viewed websites in the world. It began like this: “Old Man McGumbus, 106 years old and former World War II hand-to-hand combat instructor, was in the middle of his morning Tai-Chi routine on the beach when he noticed a live Bengal tiger there. The Old Man approached the tiger and attempted to tame it by speaking softly and quietly. “Easy girl, easy,” he repeated while holding up a stick,” and went on to get even sillier. In 2015, The New Republic wrote an in-depth profile on McGumbus, “The Mystery of the Hamptons’ Vanishing Libertarian,” and the Dan’s Papers office regularly fielded phone calls about him. One caller asked how to reach the old man to see if he’d speak at a local Veterans Day event. It was surprising how many people believed the so-called Hamptons Police Department had deployed a decommissioned U.S. Navy Virginia-class submarine to patrol local waters. Perhaps this whopper from June of 2015 turned heads because it wasn’t so far from the truth during a time when police departments were becoming more and more militarized, often being equipped with surplus vehicles and weapons. It was actually the second story about the sub, marking its first arrest, that grabbed people likely due to the well-executed image that went with it. A long series of related stories followed with mixed success. 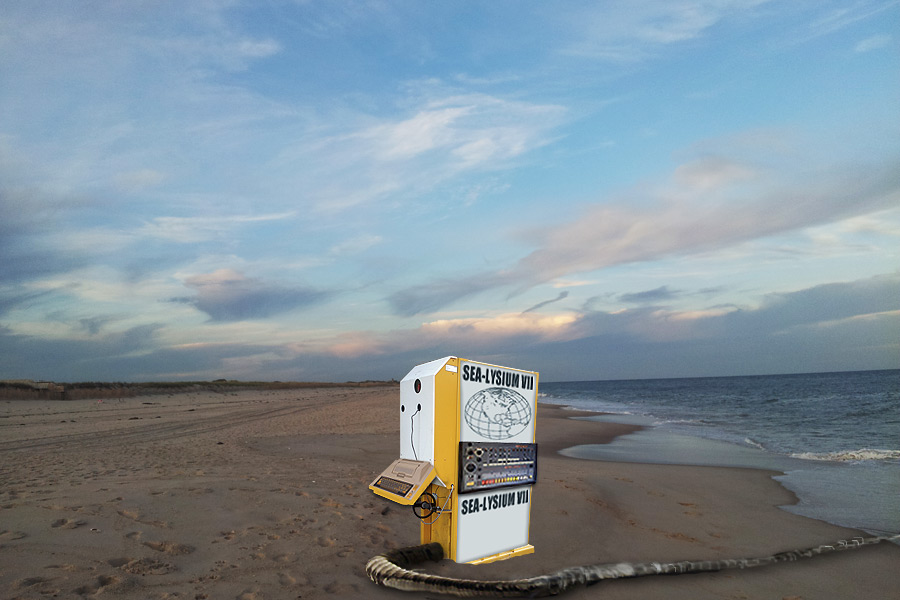 This wasn’t the first silly story about eccentric Hamptons billionaire and bon vivant inventor Derwood Hodgegrass, and it wouldn’t be the last. But the idea of a wealthy resident heating the surf at his oceanfront home from 47°F to a balmy 82°F just so he could enjoy a swim in the winter was highly alarming to some readers. “With some hard work by my guys and a few modifications, we are now able to heat about 100 square yards of ocean,” Hodgegrass said of his machine, Sea-Lysium VII, in the story, adding, “Imagine what the Hamptons would be like with hundreds of these installed along the coastline.” This idea was so offensive, we even received a call from the NY State DEC to get more details on what they thought was an impending environmental disaster that had to be stopped. To their relief, and embarrassment, we explained it was just a joke. In 2007, Dan penned a hoax that became so widespread and popular, he extended it into a weekly column for more than a decade. The story explained that a massive subterranean subway system had been discovered and brought back into operation with stops around the Hamptons. For the next 10-plus years, Dan chronicled the transit company’s dramas and news updates weekly in Dan’s Papers as a service to the Hamptons Subway. Some out-of-towners still believe it exists.

Another of Dan’s enduring hoaxes, his stories of the Great Ecuadorian Eel wreaking havoc in local waters. Originally published in December of 1999, the article warned that the eel had pulled two people beneath the ice and killed them in Water Mill that winter. He noted that trained police marksmen armed with harpoon guns would be stationed at all East End skating ponds during feeding hours, from 5 p.m. until midnight. Prior to this, in 1966, Dan reported that a sea serpent had been seen in Bridgehampton, leading the WCBS news to fly a helicopter to investigate the claim. In 2009, shortly after John McCain and Sarah Palin lost the 2008 election to Barack Obama and Joe Biden, Dan alerted the East End that the failed vice presidential hopeful would be moving to Hampton Bays. He claimed Palin and her husband Todd would love clamming, fishing and motorbiking here, “though it’s not Alaska.” He quoted a Palin email saying, “I want to live near the humbel (sic) people. I don’t want a big mansion. There’s gotta be humbel people in the Hamptons. I’m humbel.” A shocking number of readers wrote in or commented to share their rage about our 2016 story about a group of Hamptons parents who were up in arms about their children being forced to play poor people in an end-of-year production of Alain Boublil’s musical, Les Misérables. As the article pointed out, “Oddly, the group of concerned mothers, and one father, is not taking umbrage with the play referencing prostitution, child abuse, unwed mothers or criminals — the issue instead has to do with the financial status of its characters.” One mother explained that Les Miz was a bridge too far after too many productions featuring destitute characters. “Our kids have played beggars in Oliver!, orphans in Annie, poor gangsters in West Side Story and Oakies in that ill-conceived Grapes of Wrath adaptation you tried,” Jeannie Knowles (of the Hamptons Parents’ Voice, or “HPV,” group) told Dan’s Papers at the time, barely containing her fury. “When does it end?” Another story reflecting real life, this 2019 Hamptons Police Blotter told readers that cops were on the hunt for a thief who stole cash and items with a total value of at least $42 million from a car parked in East Hampton. Items taken from the “unassuming vintage Mercedes-Benz,” included $8 million in cash and $2 million in Swiss bearer bonds, along with an antique Fabergé egg worth at least $9.6 million, and an original Stradivarius violin, estimated at around $16 million. More than a few people bought this outlandish story. We even received a note from a journalist asking for followup info, and if the perp got away with it, as recently as last fall.

10. Flight to Portugal Hoax Made Real

With all the classic tall tales he’s told over more than 60 years, Dan says his favorite is the Flight to Portugal contest, an absurd story that became a very real event — and a really fun one at that! The original story described an annual contest where local teenagers would take their souped-up cars out to the grounds of the Montauk Lighthouse, where they would drive off the bluffs and into the sea below using a crude wooden launch ramp. The teen whose car made the farthest jump would get a six pack of beer and a laurel wreath crown. This was funny, but the true magic came after publication, when Dan received a letter from Portuguese National Tourist Office in Manhattan, offering the winner a one-week all-expenses-paid vacation for two in Portugal, including airfare (this is 100% true). Not one to waste an opportunity, Dan quickly got to work making the event a reality, with some obvious adjustments. Instead of cars, participants, including George Plimpton and Dick Cavett, launched small, unmanned gliders off the bluffs, and a team with surveying equipment tracked distances from a boat in the water below. A U.S. Coast Guard boat was also on hand to pick up debris. In the end a couple from Stony Brook won the prize and enjoyed a week in Portugal!

Search around on DansPapers.com to find all sorts of other fun, surprising hoaxes, many of which fooled our readers.