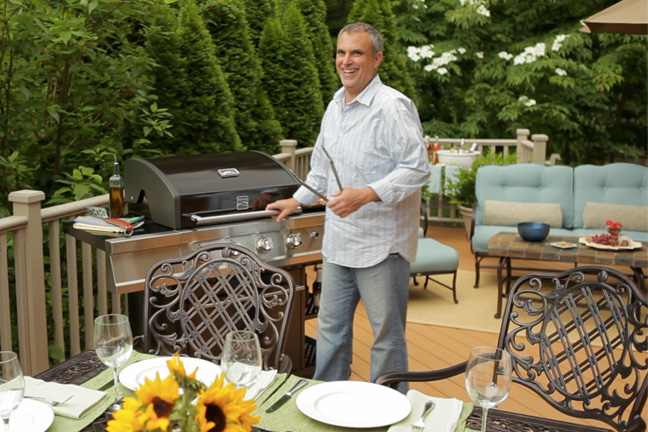 It’s rare to hear someone say with absolute, unwavering certainty that they knew what they would do with their life at age five. And then to do it with uncanny success.

“I just felt an immediate connection to the kitchen and to cooking at a really young age,” Hirsch says on the spacious deck of his Noyac home, which also serves as the set for his current series of George Hirsch Lifestyle television shows. “I grew up in a strong Italian family in Islip where the kitchen was the heart of everything. I was helping my mother cook very early. The family never pushed me, but fully supported me when I decided to take it seriously as a career. By design I wanted to learn everything about it to get that foundation, to have the variety of all the facets, though I particularly loved pastry and baking.“

Just that morning, Hirsch had whipped up a few dozen cinnamon muffins, the heady aroma mixing with the bay breezes and the scent of the potted herbs on the deck overlooking the pool.

TV host, chef, TV producer and five-time cookbook author Hirsch’s culinary career began at 13, apprenticing under European Chefs in cooking and pastry. By age 16 he won a coveted gold medal from the The Société Culinaire Philanthropique and was featured in Newsday as the youngest chef to ever receive such an award. After several years of cooking and pastry experience he graduated with honors from the The Culinary Institute of America.

After graduation he helped open the restaurant kitchen of the Helmsley Palace Hotel, the most expensive opening of its time. Soon he returned to Long Island for the opening of the largest full-service hotel, at the Smithtown Sheraton before heading west to Las Vegas. Hirsch was tapped as the executive pastry and sous chef for the highest volume hotel in Vegas, Circus Circus, where in one 48-hour period 60,000 people were served in the buffet alone.

“It was really something to cook for tens of thousands of people,” he says calmly. “I had the know-how, and no one ever questioned my abilities, as I had been working in kitchens for a decade already and had won awards in my teens.”

After returning to the East Coast, Hirsch became the executive chef to the Chairman of the Board at Grumman Corporation, the leading 20th century U.S. producer of military and civilian aircraft. While at Grumman, he cooked for hungry heads of state including Henry Kissinger and former president George W. Bush.

As a Certified Executive Chef (CEC) and Certified Culinary Educator (CCE) and after hobnobbing with top political figures, Hirsch was tapped to develop the Culinary Arts Center at the New York Institute of Technology. Chef Hirsch would receive the highest honor when he was inducted into the American Academy of Chefs.

Hirsch partnered to open his first joint venture on Long Island, American Bistro, a leader in fusion European-American cuisine. The successful bistro received favorable reviews during its six-year run. Hirsch was selected by Newsday as one of the Top Ten Executives on Long Island to watch.

All this acclaim led to him hosting a weekly feature on News12 Long Island, called What’s Cooking, where he featured topical food stories and visited other Long Island chefs. When he was offered his own show, he remembers wanting something different than a static kitchen set.

“I wanted to do a new kind of show, something impactful. While flying home to Long Island, I looked down and saw all these blue dots. They were swimming pools, and it came to me that I could do a show about outdoor cooking, grilling and entertaining. No one was doing this yet. It tied into my passion for the home.”

Down-to-earth, funny and ruggedly handsome, his first national television series, Grilling with George Hirsch, aired on public television in 1993. It was a hit, featuring traditional cooking on an outdoor grill, and it became internationally syndicated. The show would take him all over the world, from the bayous of Louisiana to the beaches of Hawaii and patisseries in Ireland.

“I was bringing the back to the roots, back to the home,” he says proudly. “We have filmed it all at my home here in Noyac. I love the East End and have always planned to film here. The kitchen is always the center, where everyone congregates. The basics are so important—I mean, how do you bake a great pie?”

Hirsch’s home kitchen is spacious and well appointed with gleaming, deep stainless steel sinks and marble tops. A large wooden island centers the open kitchen with its shelves filled with books. Vintage baking pans with shell designs line up on one wall behind the stove.

“We love to go out antiquing, and I have many of these objects here in the house. I like to find and use vintage kitchen utensils and pans. I found this great metal Scotch cooler they don’t make anymore, and my wife Trish loves these shabby chic distressed dressers. They have a history and bring a real warmth and character to a home.”

Gorgeous, green-eyed, Trish, chimes out in the background, “And we only paid $60 for it!”

Hirsch laughs and points to another object. “I particularly love these old metal chain-link garbage cans. We cleaned this one up and use it as an umbrella stand.”

The couple has been together for 11 years. Hirsch has a grown daughter from a previous relationship who is now a teacher. The only thing missing from this picture-perfect home is a pet. “I’ve been traveling too much to have a dog,” he says. “It just wouldn’t be fair to leave something alone so often. We have a relative with a pug that’s kind of our
surrogate dog.” With a life that blends into his career, pretty much everything he does locally becomes material for his show and books.

“This area is really a kind of magical vortex. From the oceans to the farms to the recreation to the architectural history, it has it all. There’s a reason it draws everyone from artists to presidents.”