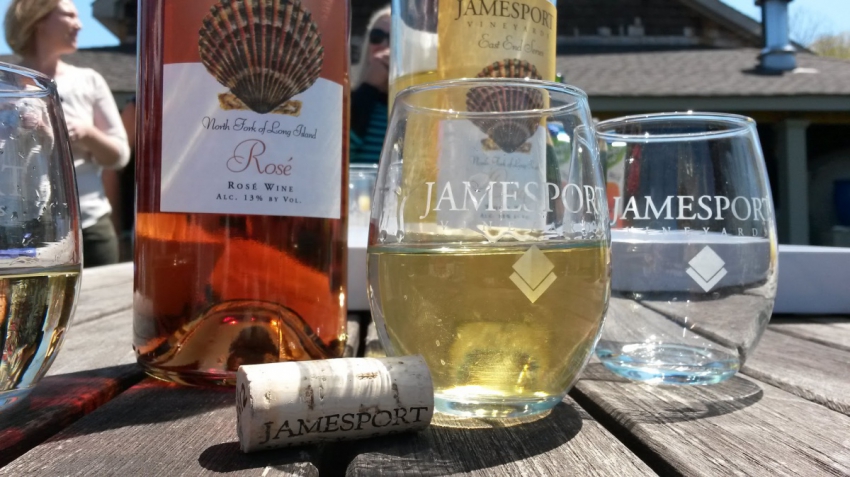 Some might think that the harvest is months away in Long Island Wine Country. Those in the know will tell you that best time to visit and sip your way across the North Fork and the Hamptons is in the spring and early summer right after bud break. We spoke with Ron Goerler, president/winemaker at Jamesport Vineyards (Main Road, Jamesport, jamesportwines.com) and former president of the Long Island Wine Council, to get the inside scoop on historic vintages, his new winemaker, and the much anticipated end of summer bash, Dan’s Harvest East End that brings together 40 vineyards for an unparalleled evening celebrating the best of East End food and wine.

Goerler and family moved to the North Fork in 1981 and literally “bought the farm in Cutchogue where we farm 60 acres.” He says, “We were not farmers but the farm had apple orchards and was being farmed by various farmers.”

After going to school for agricultural business and soil science Goerler went into business with his father, “My father bought Jamesport Vineyards in 1985 and that is when I decide to get into the business with him. The area was much different then than it is now. Nobody knew or understood how to grow grapes or make wine. It was an exciting time because we were all learning from each other and there was only a handful of us at the time.”

He recalls the early days especially 1988, “That was a hot summer the vineyards were young and so were we. The wines that year were the best we had ever made.” Many great years would follow in the region with 1991, 1997, 1998, 2001, 2005, 2007, and 2010 all bottling notable wines. “What makes a great vintage over another is the weather and lack of rain. The lack of rain will stress the vine a cause the vine to struggle and produce small berries and make concentrated wines with bigger tannin structure. Wines that will age. If the weather is cooler and there is more rain you will have unripe fruit and wine that lacks body.”

“2010 was a very hot summer,” says Goerler. “So 2010 was a small crop with lots of concentration and Tannins that will help age the wine. These type of vintages do not happen every year. Maybe 1 in 10.”

“The region itself it continues to grow and attract more people every year,” says Goerler. In fact, what began as a few acres of grapes planted in Cutchogue by The Hargraves, establishing Hargrave Vineyard (now Castello Di Borghese), has become a thriving year-round industry spanning both the North and South Forks. Currently there are over 3000 acres of grapes planted this year alone and more plantings being considered as well as over 60 wine producers. “The wine keeps getting better.”

Over at Jamesport Vineyards, a new winemaker came on the team last season, “I just hired a new winemaker names Dean Babiar. He was making wine over in Italy and France and has landed out here on LI and we are very excited for him.”

Jamesport Vineyards offers a wide variety of wines for any palette. The Estate Series, the flagship collection including a Late Harvest Riesling and their signature Melange de Trois, a blend of Cabernet Sauvignon, Merlot, and Cabernet franc. The East End Series is a collection of crowd favorites including Cinq, available as both a red or white table wine, Merlot, and Rose made in partnership with SPAT (Southold Project in Aquaculture Training).

The vineyard is always hopping with live music on the weekends as well as wood fired oven and artisan flatbreads and oyster bar.

“The event keeps on getting bigger and better,” says Goerler of Dan’s Harvest East End. “The harvest event is a great event…it is a gathering of all the best wines made on the East End. [Guests] can taste over 40 producers under one tent. It is also a celebration of all the North Fork has to offer – restaurants, vendors, and of course Dan’s Papers.”

VIP guests are in for a rare treat he explains, “We are going to be adding a barrel sample component this year to taste the 2014 vintage.”

Dan’s Taste of Summer kicks off with Dan’s GrillHampton on Friday, July 17, and continues on Saturday, July 18, with Dan’s Taste of Two Forks, both at Sayre Park, 156 Snake Hollow Road, Bridgehampton.  Dan’s Harvest East End, the can’t-miss food and wine classic, rounds out the trio of events on Saturday, August 22, in Cutchogue.  For more information, including tickets and VIP packages, visit DansTaste.com.