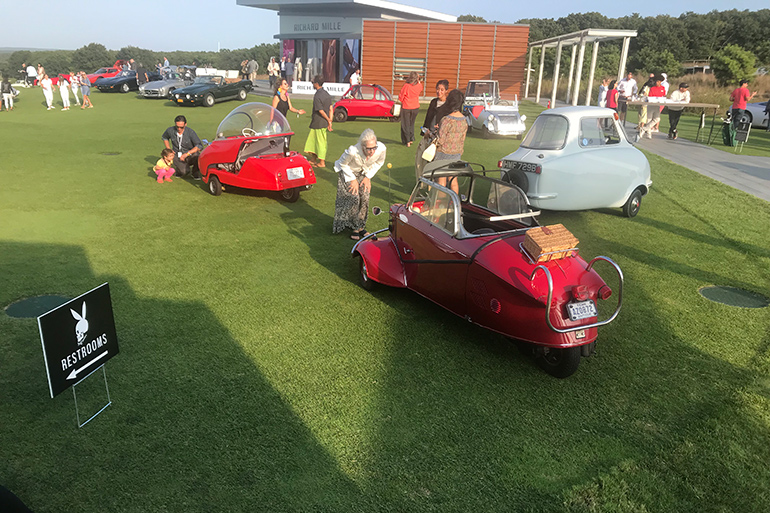 If you don’t know about Bob Rubin’s private party last Saturday in Bridgehampton, it’s probably because you weren’t invited.

He invited a few friends. Like 3,000. They were his guests. And it was a nice party.

Bob Rubin is a car buff. Not long ago he owned a series of expensive cars, many of them antiques or classic cars from years gone by. But in recent years, he sold his collection. I don’t know why. You could ask him.

On the other hand, he still likes cars of this sort, as do, for example, Jimmy Fallon and Jerry Seinfeld. And if Rubin doesn’t have many anymore, he still likes to have them around. So he thought he’d throw a party and invite some people who owned such cars.

During the time Bob Rubin had his car collection, he bought the old, rarely used Bridgehampton Race Circuit. This was in 1991, and people thought the roar of the engines and smell of diesel gasoline in the hills of Bridgehampton after 30 years of existence was just too overbearing, so the environmentalists got together with the town and severely reduced the racing that could go on there. As a result, Rubin turned the old race track into a private golf course. He left the straightaway and the first sharp right turn intact as a remembrance of times gone by. He also left up one of the old billboards for a particular brand of motor oil. Then he got members to join. It’s been a big success.

And so, Bob Rubin decided to array some sports cars on the fairways up near the clubhouse so his guests could look at them. Then he sent out invitations, and lots of people, many of them from as far away as Italy, Australia and California, showed up.

It was held on September 14, and arriving guests were told in their invitations to park in the former potato fields of the old Tiska farm on Millstone Road, two miles from the golf course, where sleek black luxury shuttles would take guests up to the party. I got there about 4 p.m., about an hour after the party started (it ran till 7). Lot attendants waved me to a parking spot. I parked next to a Maserati on one side and a beat-up but classic 1991 Land Rover that looked like it had just come back from a safari but was now used as a family around-town beach car. Walking to the luxury shuttles lined up, I estimated the number of cars from the attendees in that former farm field to be about 600. At the golf course, the entry driveway leading up to the clubhouse was lined with about 30 enclosed trailer trucks. These trucks had gently brought precious cars from all over the country to show.

At the clubhouse where the shuttle passengers disembarked were handsome young people handing out party favors and information. On the decks surrounding the clubhouse were two scale-model helicopters on display columns, a model private jet and a series of bars and kiosks where more handsome young people offered up wine, champagne or fancy cocktails for all guests. Robert Gordon’s band played rockabilly.

Surrounding the clubhouse within walking distance out on various fairways were 19 food-and-beverage stations where you could get free burgers at one or hot dogs at another or chicken or tacos or ice cream or more exotic fare such as oysters, dumplings, wontons or mission ceviche. These were intermingled with the more than 250 exotic cars you could walk around, take pictures of or, if the owner was around, ask him or her about its history and inquire if the car was for sale and if so, for how much.

Some were hundreds of thousands of dollars. They included hundred-year-old steam-driven cars, cars owned by celebrities, speed-record-setting cars, English or Italian sports cars from the 1950s, convertibles, luxurious present day cars, some ridiculous looking cars built for one, and even the introduction for the first time to the public of a new luxury automobile from Aston Martin called a Valhalla.

Among my favorites was a 1948 Tucker—a chrome-covered rocket ship sort of car built by a car company that was in business for less than a year. It had three front headlights, two where you’d regularly expect them and one in the middle of an engine compartment in the shape of a torpedo. I also enjoyed looking at a bright red 1909 Isetti that had an air pump in the open cockpit next to a handbrake that attached itself to all the tires so the driver, without getting out of his seat, could pump up a flat tire.

There was also the fuselage of a full-size helicopter you could sit in, a walk-through passenger section of a full-size private jet, a submarine submersible and some very fancy Maseratis and Rolls-Royces. There was also a Leroy Neiman art show in a series of 10 tents on platforms set up not far from that former race course’s first turn. All together, the whole extravaganza covered about a quarter-mile by a quarter-mile of the golf course with the clubhouse as its centerpiece and lawn that included tee boxes, fairways, sand traps, greens, putting greens and fescue weeds. But there would be no golf played on this day. At least on these holes.

I should also mention all the companies that sponsored things to eat, drink, sit in, walk through, take pictures of and become familiar with if you were a close friend of Bob Rubin, but that’s not what this account is all about.   Anyway, there were about 20 sponsors.

I just want to thank Bob Rubin for holding this little party. Everyone had a wonderful time. Next year he’ll hold it again. And maybe you’ll be invited this time.