Our Amazing History: Hurricane of 1938 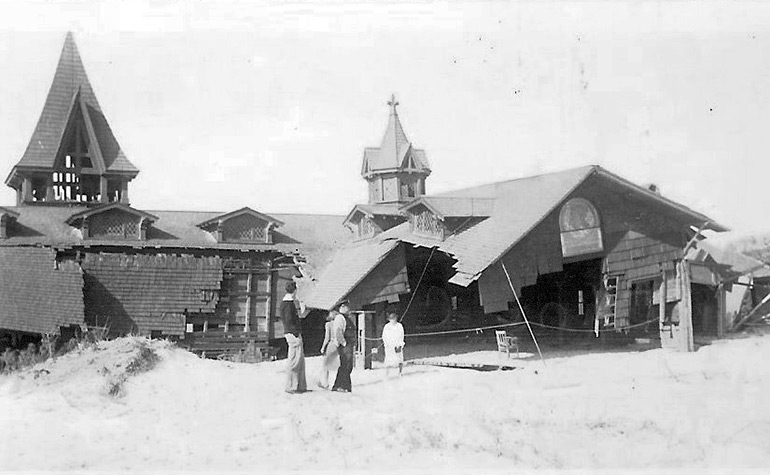 The single worst storm that ever hit the Hamptons took place during just two hours beginning at 4 p.m. on September 21, 1938.

Three days earlier, the weather bureau had reported a hurricane in the Atlantic headed west toward Miami. Miami boarded up its windows. But nothing came of it. That was the sum total of all the warnings that took place along the Atlantic seaboard until the sky darkened over the ocean off the Hamptons three days later.

Hurricanes traditionally travel about 10 or 12 miles an hour. Somehow, this storm had met up with a dramatic and never-before-documented high-pressure curtain sometime after that Miami warning. It wheeled north, picked up speed and 11 hours after passing offshore North Carolina, slammed like a runaway freight train into Westhampton Beach traveling 90 miles an hour. That force, added to 120 miles an hour of the hurricane itself and the 40 miles-an-hour counterclockwise swirl from the eye east to the lighthouse became a screaming monster of wind and rain that, at 4 p.m.’s high tide, destroyed almost everything it hit and killed nearly 50 people on Long Island.

First came the wave. Hundreds of summer mansions, many of them with 10 or 12 bedrooms, lined the ocean dune from Moriches to Amagansett. Fortunately, since it was after Labor Day, only a few were occupied. The wall of water announcing this hurricane exceeded 30 feet and shattered all but 34 of the 350 mansions on Dune Road, sending the people hanging on to roofs, bathrooms, walls and furniture tumbling across the bay and into the downtowns of Southampton and Westhampton Beach where flood waters exceeded 10 feet and threw cars, homes and boats everywhere.

Church steeples came down in all the villages, including at Sag Harbor where the tallest building on Long Island at the time, the 185-foot-high Whaler’s Church steeple, crashed down. Beach clubs were wiped out. The St. Andrews Dune Church in Southampton was a ruin. In East Hampton, the town’s giant trees on Main Street and Woods Lane cracked and fell, blocking the streets and smashing into cars, telephone poles and homes — 164 trees by actual count.

An earthquake was reported centered in Westhampton Beach on sensitive seismograph equipment at Fordham University in Manhattan.

The worst, perhaps, was at Montauk. At the time, the village consisted of small homes by the Long Island Rail Road station on the arc of Fort Pond Bay. There was the Union News Restaurant, a post office, a school, a market, fishing boats and homes. All were smashed and thrown out into the bay. Fortunately, as the wind rose, all the residents ran across the railroad tracks and into three railroad cars where they watched the storm carry everything off. That community was never rebuilt.

Nine breaches  were opened in the barrier beaches of the Hamptons. The government had been trying to open one at Shinnecock but they had given up. Now in just two hours it was a quarter-mile wide. No one ever closed it and it is there today.

The East Hampton Town Town Clerk Richard Gilmartin was in East Hampton when Montauk became an island, with Napeague underwater and all communications  to the villagers cut. As things subsided, Gilmartin, whose family lived in Montauk, took an eerie nighttime tractor ride through hip-deep water covering Napeague to be greeted with cheers from the Montaukers in the railroad cars.

And that is the story of the Hurricane of ’38.