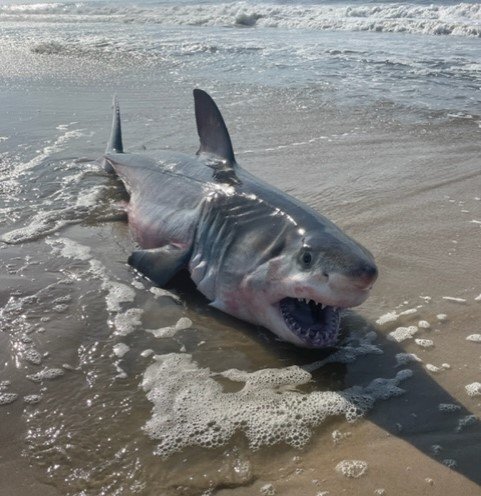 Swimmers beating the heat might be considering the pool over the ocean this week after a great white shark made and appearance on a Quogue beach Wednesday morning.

At approximately 9:33 a.m. on Wednesday, July 20, Quogue Village police responded to a report of the dead great white shark on the beach along Quogue’s popular Dune Road, between numbers 80 and 90. The shark, clearly identifiable as a juvenile great white, of Jaws fame, was reportedly 7–8 feet long, and was originally reported by an area resident on Dune Road.

Responding officers were able to get photographs of the shark, but it washed back out to sea before they could secure the carcass.

“We have been in contact with the South Fork Natural History Museum Shark Research and Education Program, who are attempting to monitor the situation along with our law enforcement partners,” Lieutenant Daniel Hartman of the Quogue Village Police Department said in a press release.

“At this time, we are cautioning swimmers and boaters in the area to be aware of this ongoing situation, and to keep distance to allow law enforcement to monitor this event,” Lt. Hartman added.

Great white sharks, which can reach lengths over 20 feet and weigh in at more than 5,000 pounds, are not uncommon in South Fork waters. In 2016, a great white shark nursery, or birthing area, was discovered in the waters off Montauk when OCEARCH, a marine science and conservation organization, tagged nine pups there.

And, of course, world-renowned shark hunter Frank Mundus (often credited as the inspiration for Quint in Jaws) famously caught an unbelievably huge great white weighing 3,427 pounds off Montauk in 1986. A replica of it still hangs at the docks of Star Island Yacht Club in Montauk.

There were five shark attacks reported in Long Island waters over two weeks this summer, including an attack at Smith Point Beach in Shirley, two at Ocean Beach on Fire Island and one at Fire Island’s Seaview Beach. The first attack of summer occurred on June 30 at Jones Beach near Amityville in Nassau County.

And people continue to report shark sightings on beaches across the Long Island.

None of this summer’s attacks were said to be from great white sharks.

Sharks do not purposely hunt humans, and bites typically happen defensively or accidentally. Their numbers have increased thanks to successful conservation efforts over the past decades.

Police are asking anyone who spots the shark that washed up in Quogue, which local marine biologists would still like to study, to contact the Quogue Village Police at 631-653-4791.