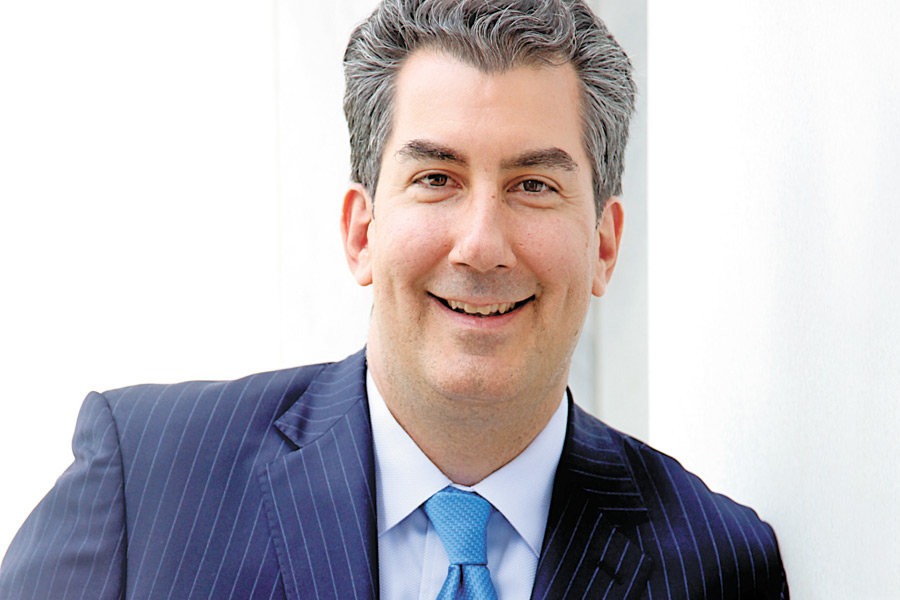 I am sure you have heard that Gurney’s Montauk is in the middle of a huge makeover that will return it to its former position as one of this country’s great resorts and spas. Already much of it is done. The three restaurants are now stunningly beautiful with great glass vistas that look directly out to the ocean. Seventy-one existing rooms have been refurbished. Another 38 are new. A huge new sand-filtered indoor saltwater pool (the only one in North America) has already been set in place. The Beach Club has been re-done. And the huge spa, all 30,000 square feet of it with its 40 treatment rooms, has been refreshed. And there is a lot more to come.

Gurney’s was originally built as an inn and series of rustic cabins on the oceanfront cliff in Hither Hills by Maude Gurney in the late 1930s. It was “dry,” that is to say no drinking was allowed. In the 1950s, in another era, it was purchased by the Monte family, with Nick Monte at the helm, and it was transformed into a world-class resort. Unfortunately, the building of the spa on the eastern side of the resort got Gurney’s into financial trouble. You wouldn’t know it by going there. Everything was still just fine. But in the legal battles for control that followed, the family had to spend much energy avoiding attempted takeovers by a bank and then from some developers from Alabama.

A further development, involving the sale of weekly timeshares, caused further problems. Turned out that at a certain point, the majority of the stock in Gurney’s became controlled by all of the timeshare owners. It was they, all 5,000 of them, who now had the majority interest in the place. (This writer owned Christmas week in one of the units). But the individual timeshare owners couldn’t agree among themselves how to proceed. The Monte family, now as management, continued to run the place, but without funding beyond the basics that the timeshare maintenance costs were providing, the whole thing was going downhill. And now, it showed.

Into all of this, quite accidentally, came a man named George Filopoulos, a tall, mild-mannered fellow who in 2005 bought a private summer home for his family on the ocean in Hither Hills not far from the Inn and got involved.

One day, one of his friends and his wife were having dinner with them at their summer home. The friend owned a timeshare at Gurney’s and had all sorts of stories to tell about how the shareholders were fighting amongst themselves.

“There seems to be no way out,” the friend said. “The maintenance fees started going up. That caused some of the timeshare people to abandon their shares. And that made the fees go up even further. No one knows what will happen to Gurney’s.”

“You should get involved, George,” his wife, Trish, said.

George demurred. But then he thought about it. Indeed, he was trained to get people out of just such a mess, while, in the process, returning projects to a new success.

George was born and raised in a semi-attached home in a quiet neighborhood in the north part of Flushing, New York. His mother was from Athens and his father was from Sparta, Greece. When George was 3 years old, his father left the marriage, and his mother took on the task of raising him and his brother alone.

“I don’t think of my biological father as my real father,” George told me. “When I was 6, my mom re-married, and it was to her second husband that I became a son. He was an immigrant from Ecuador and a master diamond setter who worked for Tiffany and Winston and other retailers on 47th Street in Manhattan. That man is who raised me. And his name is Cesar Bastidas.”

Bastidas worked not only for the major stores, but he also did settings from a tiny office at their home, in what was little more than a closet. He also designed jewelry and manufactured it. He retired just five years ago, and he is surely very proud of his son, as well as the other two young men he raised. Nick, George’s younger brother, is a plastic surgeon on the upper east side of Manhattan. Tom, George’s older brother, works in real estate development, overseeing a part of the business in New Jersey.

George went to PS 21 and then the Bronx High School of Science, commuting from Queens every day. Outside after school he played stickball and handball, and he won the National Junior Handball Championship in 1985. He also worked part-time in the Diamond District on 47th Street both for his father and for others. He learned business. And then he went off to Hofstra for college. But he didn’t last. He was too eager to get into business himself.

“I had registered for 16 credits. But I also worked jobs to earn a living.”

He tried his hand at computer programming, then in the jewelry business, then he got his real estate license and worked for John Anthony Associates on 41st Street and Fifth Avenue in Manhattan. These were hard times. The year was 1989 and there were no big deals, only little ones. There were also rentals. But he learned.

“In the late 1980s, many banks were being taken over by the FDIC. There was the Savings and Loan scandal. Nobody was financing acquisitions. There was a need to liquidate, and many people did, but the projects often just got dumped onto the market and left. There were not enough buyers.”

George began to look for small units to buy, fix up and re-sell.

“A bank would foreclose on a 64 unit apartment house. I’d bring it out of bankruptcy.”

When George was 19, he met a girl who changed his life. He and some friends played football and Frisbee on weekends in Whitestone Park. They’d all show up in two or three cars. One day, they went to a bar near NYU and decided to join a group going down to Daytona for spring break. One of those in the group was a pretty girl named Trish, who was 18. She was a student who also worked at The New York Times as a reporter’s assistant in the metro section, and down in Florida, they fell in love. They are still together, 25 years later. They lived together for three years, then, when he was 24 and she 23, they got married. Together, they bought a house that was going through foreclosure in Forest Hills, paying $120,000.

“It was our first house,” George says. “It had a backyard.”

They would commute together, Trish to The Times, and George to his new firm, Metrovest, that he set up in Astoria, Queens, initially to broker real estate deals and later to not only broker them but also participate in them.

George and Trish have enjoyed a wonderful life together. Metrovest thrived. The company moved to Manhattan. The couple moved to Westport, Connecticut for two years and commuted back to the city by car, which was tough. Eventually they moved back, first to the West Side, then, as they prospered, to the East Side. They rented a summer home in Lazy Point, Napeague and then, a few years later, built a home oceanfront in Hither Hills. Today, they have two young children, George Jr., 3 1/2, and Grace, 1. And they love Montauk.

Perhaps the largest project that George and Metrovest ever undertook was the transformation of a former hospital in Jersey City into a condominium and luxury rental complex.

“This was the largest historic conversion in the state of New Jersey and the largest in the United States,” George told me.

The hospital had been built in the 1930s as a project by Jersey City Mayor Frank Hague and financed by the Federal Government under Franklin Roosevelt. The buildings comprised 2 million square feet. And the project is now known as The Beacon.

Prior to that deal there was another large Jersey City transaction consisting of two high-rise towers totaling 500 units. “This cooperative, known as Gregory Park, had 400 families who were about to be foreclosed upon.”

There were over 200 investors interested in bidding at the foreclosure sale, which would have resulted in the 400 families losing their homes and their equity as the building would have reverted to rental apartments.

George’s plan, a unique one, was to talk to the co-op owners and make them part of the solution.

The project was renamed Metropolis Towers.

Five thousand windows were replaced, new elevators put in, new balconies constructed, new management brought in. Half of it now is rentals, and the other half is for the co-op owners, who retained their homes and saw their equity increase dramatically.

Since that time, dozens of other projects have come his way, to become dealt with in this light-touch arrangement with a controlled bankruptcy and new organization that creates a new co-op so those who want to stay can.

Does this all sound very familiar?

There had originally been 5,000 timeshare weeks sold here at Gurney’s. When George got involved, the number had dwindled down to 1953, because all the rest had simply abandoned their shares.

“I spoke with hundreds of timeshare owners to explain our proposal. If they did nothing, their maintenance fees would continue to skyrocket and they could eventually lose everything and continue to face years of lawsuits. Our plan included three choices. First, they could sell their shares back, which about 1,000 did. Secondly, they can stay for four more years and not pay any maintenance fee. Or third, they could retain their shares, enjoy improved Gurney’s for four more years at a capped maintenance fee of $1510 per week.”

And with that, George Filopoulos started the revitalization of Gurney’s. He took on a partner, Lloyd Goldman. He re-did the Seawater Grill, the Ocean Café—the sushi bar is now open—improved the Beach Club Restaurant and put in a market. He hired Jennifer LeRoy, the daughter of legendary restaurateur Warner LeRoy, to take over the food management, hired hotel designer Michael Kramer to come in and re-design the place and he made a new arrangement with Paul Monte, the manager of the inn since Nick’s passing five years go, to run Gurney’s with the staff he had along with some new staff, and the whole thing is underway. There are training procedures in place, new furniture, new uniforms, new decking throughout, new signage, new landscaping.

“Some people said change the name. I said this place has a national reputation. Everyone knows it. It’s an icon. And I am going to make it the great success it once was.”

As a matter of fact, George says he had not been home in Manhattan much for months. And he will see it through.

It is all very exciting. Nick Monte would be proud. Maude Gurney, I’m not so sure about. But the hamlet of Montauk is so excited to see this, its primary hotel and spa, restored so wonderfully and professionally. You should come see it yourself.