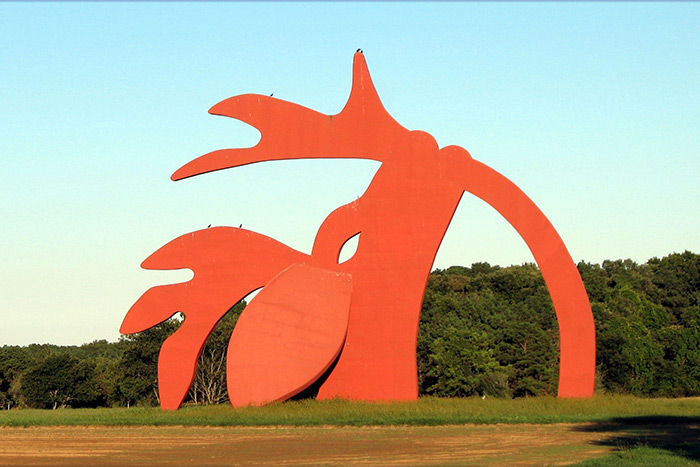 After a long hot drive out toward the vacationland of eastern Long Island, motorists and their passengers have always delighted in seeing the 50-foot-tall sculpture Stargazer by the side of the road as they come down the Manorville Road from the Long Island Expressway.

It is the first marker telling them they are approaching the Hamptons. The sculpture is of a deer, 50 feet high, its head raised to the sky in wonder. Set at the edge of a stunningly beautiful 54-acre sod farm, the sight of it causes excitement in the car.

“Give us your tired, your poor, your huddled masses yearning to breathe free…” it says. Well, that’s not exactly the welcome Stargazer offers. But it’s the same concept.

Four months before the pandemic hit in February 2020, however, the storm Isaias swept through the East End and seriously damaged Stargazer, ripping much of the paneling off, weakening the interior beams and causing water damage where woodpeckers had pecked through the edging. After that, it seemed to many that it was sharing the pain that everyone was going through with COVID-19.

But now, the pandemic restrictions are lifting, and people are coming out of their homes into the streets to enjoy life again. And now comes the news this week that the problems preventing the repairs to Stargazer are lifting too. A Go Fund Me banner is about to go up in front of Stargazer, and without a doubt the $100,000 funds necessary to create a whole new Stargazer will appear in short order.

I spoke yesterday to Bob Morris, the loyal companion of Linda Scott, the sculptress who got the idea and sketched out the design for Stargazer, which Bob Morris built with his own hands 30 years ago. (Linda passed away in 2015.)

Morris’ joy to me over the phone was unmistakable.

“I have come to terms with the new owners of the farmland on which Stargazer sits. Originally, farmer Henry Pollock had said Stargazer could stay on his property for as long as we wanted. But he passed away and the lawyers of his estate only gave me a lease on a year to year basis. Can’t make a restoration if it could only be there for a year. But now, the new owners not only want Stargazer there, they will also help me raise money to make the repairs. I will rebuild it stronger and the woodpeckers will be faced with metal flashing. It will be watertight.”

Stargazer was originally commissioned to be placed on Daniel’s Hole Road at the head of the driveway that went up into the woods to the 12-acre Animal Rescue Fund complex across the way from the East Hampton Airport.

I interviewed Linda Scott that year after I learned of the project. Educated at Sarah Lawrence and for a time at Harvard, she was now living on the Luna Farm on Parsonage Lane in Sagaponack creating art.

Works were at the Fogg Museum in Boston, at the Parrish, at Guild Hall and other places. Her paintings were in the collection of Steven Spielberg and Henry Koehler.

“The deer is the symbol of truth,” she told me. “I had accepted the commission to build something that size because I wanted to show my gifted son, Morgan, who was 10 years old at the time, that if you have a talent, you should go for it and not shoot yourself in the foot or cut off an ear.”

When Scott and Morris completed the project, they trucked its pieces to the site where Trochia Steel Works of Manorville with a 200-ton crane was on hand. Trochia was to raise up and lock together the metal framework on which the wood beams and the stuccoed and painted panels could then be attached.

At the site, an enthusiastic crowd of wellwishers were enjoying wine and cheese on tables set up nearby — a party atmosphere — when an Ordinance Inspector from East Hampton Town arrived. He said the Town Supervisor Tony Bullock would not allow this sculpture to proceed. He said it exceeded maximum height requirements and there had been complaints that Stargazer would become a distraction not only to the neighborhood, but to pilots as they approached the main runway of the airport just to the west across that road. It could cause a crash.

Under the circumstances, Trochia refused to set up the framework. Later that day, Linda called me, as editor of Dan’s Papers, among other people in the media. Wasn’t there something that could be done? Well, there wasn’t. But we all wrote about what happened. And soon thereafter came the generous offer from farmer Harvey Pollock. And so the Stargazer became the sentinel that welcomed people to the beaches, woods, ponds, fields and farmland of the Hamptons.

Won’t you help fund its restoration? The banner reads SAVE THE STARGAZER. Do it.