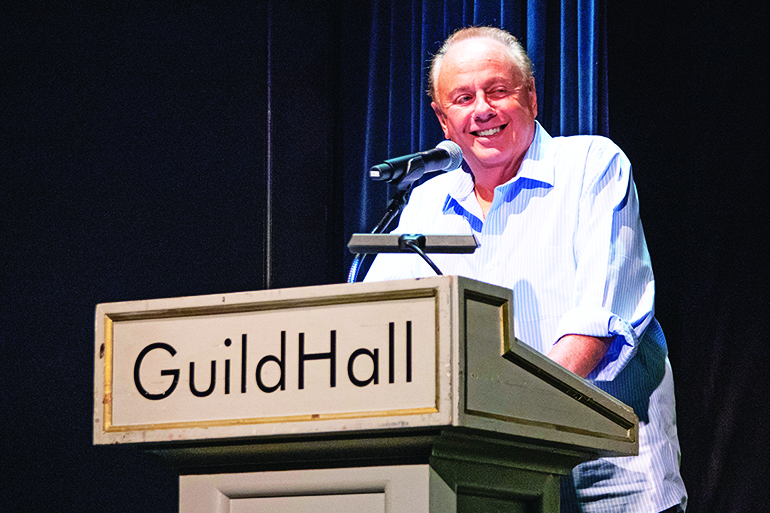 Roger Rosenblatt doesn’t hesitate when asked where he found the inspiration for his new one-man show. “Boredom!” he exclaims, tongue planted firmly in cheek. He will perform his latest project, Lives in the Basement, Does Nothing–A Writing Life, at Bay Street Theater and Sag Harbor Center for the Arts on April 26 and 27. After discussing the show with Rosenblatt, one thing is certain—there’s nothing boring about his “writing life.”

“It’s about the ‘writing life,’ and it’s half-funny and half-serious, because I’m generally funny but the stuff is serious,” Rosenblatt explains. “I love the life and I love writing. I love one-man shows.” Lives in the Basement is about two of Rosenblatt’s lifelong passions: writing and music. The author will explore what it means for him to be a writer, as well as play the piano and sing, which he has practiced since childhood. “Deciding to go on the edge a bit, I thought I’d go on piano and sing a bit and talk about jazz and writing,” Rosenblatt says, noting that “I don’t read music, but I’ve played since I was three or four years old. I drove music teachers crazy—they’d run out of my house screaming.”

Rosenblatt is both excited and nervous to perform for the audience. “I play by ear,” he says. “I’ve never played in public before and I thought, why not? But I wanted to connect the music with writing. That’s what this show is. It’s about the connection between music and writing, and improvisation. And there’s a piano in the middle of the stage, and I talk about one or another aspect of writing, narrative, the process, the wonders of writing.”

Despite being a one-man show, Rosenblatt will have a guest at each performance. “Forty minutes into the play—I’ve never seen this done before—I asked two friends, Amy Hempel [on Friday] and Alice McDermott for Saturday night to come up and talk to me onstage for a few minutes,” Rosenblatt reveals. “We will not prepare anything and I don’t know what’s going to happen.” Hempel and McDermott are both celebrated writers in their own right and have different backgrounds, so each night will be unique.

In addition to Lives in the Basement, Rosenblatt teaches writing at Stony Brook Southampton. One of the courses he is most passionate about revolves around students discovering and writing stories that come from themselves. “The course is based on the premise that the writer writes about their own life,” Rosenblatt explains. “James Joyce himself is reflected in Finnegans Wake, if you can find it. Let’s look at your life and find the story you want to tell. They love it; I’m taking their lives very seriously. The difference between writing teachers and every other course is that we’re interested in [students’] lives. You’ll always be mining it to see, is it the complete story? It’s more fun than any course I’ve ever done.”

Rosenblatt also has a film in the works, based on his first novel, Lapham Rising, for which he also wrote the screenplay. Lapham Rising marked a turning point in Rosenblatt’s creative career. “For years I put it off,” he says of his foray into fiction. “I was first in academia, then journalism, and never had the courage to say I wanted to write creatively. In 2003, we were at the summer Writers Conference and I listened to Margaret Atwood and E.L. Doctorow, and they were wonderful. They’d been doing what they wanted to do their whole lives.” Lapham Rising was a success and the film will shoot this year, starring Frank Langella, Kiernan Shipka and Bobby Cannavale.

For a show with so many moving parts—piano, onstage guests—Rosenblatt has a simple wish for audiences who see Lives in the Basement, Does Nothing–A Writing Life. “I hope they like the show because I have to practice every day. It ain’t easy!”

See Roger Rosenblatt in Lives in the Basement, Does Nothing–A Writing Life at Bay Street Theater, 1 Bay Street, Sag Harbor, on April 26 and 27. For tickets and more information, visit baystreet.org.