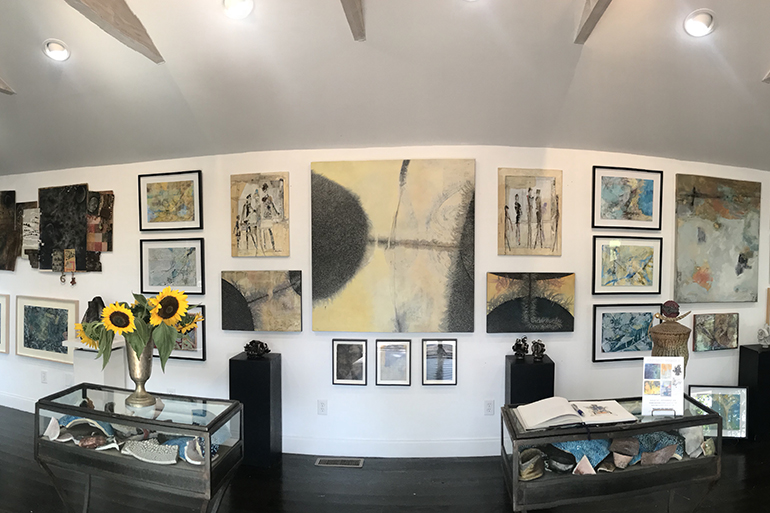 The North Fork is showing off its cred as a cultural destination with the region’s first-ever North Fork Art District Tour this Sunday, August 25. This self-guided adventure sends participants to look at area galleries and an artist’s studio, each featuring special exhibitions, creative demonstrations and artist meet and greets. The day will conclude with an evening of local food and wine, a live art auction and complimentary special edition art gifts.

Guests are encouraged to roam the North Fork in-between art destinations—which can be visited in any order—and explore all of the region’s cultural offerings, shops and farm stands, and bucolic natural beauty, including picturesque farms and vineyards.

William Ris Gallery owner Mary Cantone explains that she and Cutchogue gallerist and photographer Alex Ferrone have collaborated on many projects between their galleries over the years, and the North Fork Art District Tour is one more way to promote all the wonderful art in the region. “We wanted to bring attention to the fact that there are galleries on the North Fork,” Cantone says. “Alex and I are hopeful that many artists will come to our respective galleries and spend time with the people on the tour.”

Named in honor of the late painter, William Ris Gallery is run by Cantone, who is Ris’s sister. She brings a keen eye to selecting her artists, many of whom have pieces up at the gallery this weekend. Abstract Women II is also on view at William Ris Gallery during Sunday’s tour, with work in a variety of media by artists Dianne Athey, Anahi DeCanio, Jacqueline Ferrante, Diane Hulse, Judith Nilson, Sarah Jaffe Turnbull, Marilyn Weiss, Valerie Zeman and Anokhee Designs. Tour participants who visit William Ris Gallery will take home a limited edition print, signed and numbered by artist Keith Mantell. “That’s a bonus,” Cantone says.

Visitors to Hector deCordova’s studio will enjoy meeting the artist and viewing his acrylic paintings, watercolors and collages. Never one to follow the “rules” of painting, deCordova sees his work as an exploration, so one never knows exactly what to expect, other than brilliant, compelling images. As he says of the perceived rules, “I know them. I have studied them, I respect them, but I no longer put them in my consciousness when I paint.” Watching deCordova in action should be a thrill for any art fan on the tour.

This is the first of three scheduled North Fork Art District Tour dates. Additional tours are planned for Sunday, September 15 and Sunday, October 27, and will include new exhibitions at the Alex Ferrone Gallery and William Ris Gallery, along with studio visits with Caroline Waloski, Scott McIntire and Lori Hollander. Visit northforknow.org/art-district-tour for tickets and details about this Sunday’s tour and those in the coming months. $135 per person for tour, Director’s Dinner, live art auction and art gifts from each destination.